Smart Borders 2.1 – How we can solve the Brexit Irish Border Challenge? The Missing Piece

In May 2017, the European Parliament Constitutional Affairs Committee asked me to write an academic research report on how to design the new post-Brexit Borders between European Union and United Kingdom, based international standards and global best practices.

The report and proposal, “Smart Border 2.0 Avoiding a hard border on the island of Ireland for Customs control and the free movement of persons”, was presented for the European Parliament on 28 November 2017. Since then I have been asked to give testimony at hearings also with UK Government House of Commons on two occasions and to the House of Lords one time. In addition, I have done many media interviews and my report has been quoted in hundreds of articles.

The missing piece of the puzzle

During this period I have noted that two of the most important components of the Smart Border 2.0 model that I describe in my report were not fully understood by many people. My conclusion is that I should have been more detailed and clear in my report. Some of the things that I took for granted as common knowledge, apparently were not known by non-experts.

I have clarified my proposal in the hearings with MP:s in the House of Commons and House of Lords, so if you want hear my further explanations please listen to the recordings of those hearings on Parliament TV. For those of you that don’t find time to listen to the recordings I will describe what I mean by three pictures (here below) that clearly should have been in my report to make my proposal more transparent and clear.

The critical question always asked it he following: Is it possible to have a frictionless border? The answer? Yes. It is.

There are no frictionless borders in operations for the moment, but as I have many times stated, the model I escribed has in the past been tested operationally by EU and Norway during four years on the Sweden-Norway-border.

The new border model – how it works

However, to implement this proposal with no infrastructure at all at the border there must be a maximum level of trust between the two countries on each side of the border. In addition, there need to be a trusted trade lane involving companies with a registration as Trusted Traders which then move the border formalities and potential inspections away from the border to before and after the operational trade transaction.

Now, the remaining part is that Government on both sides need to know the time when the goods passes the border, since this time stamp regulates a wide range of the laws and regulations that constitutes the border formalities (the status of the goods, the ownership of the legal obligations, the time that manifests if certain rules and regulations are applicable or not etc). In my original report I described different technology solutions that can give us this time stamp, like e.g. number plate readers, RFID technology, CCTV cameras (active border identifier solutions), GPS/GSM technology (Passive Border Identifier solution) and many other options. However, with maximum trust between two parties we can also let the Trusted Trader report this time stamp. 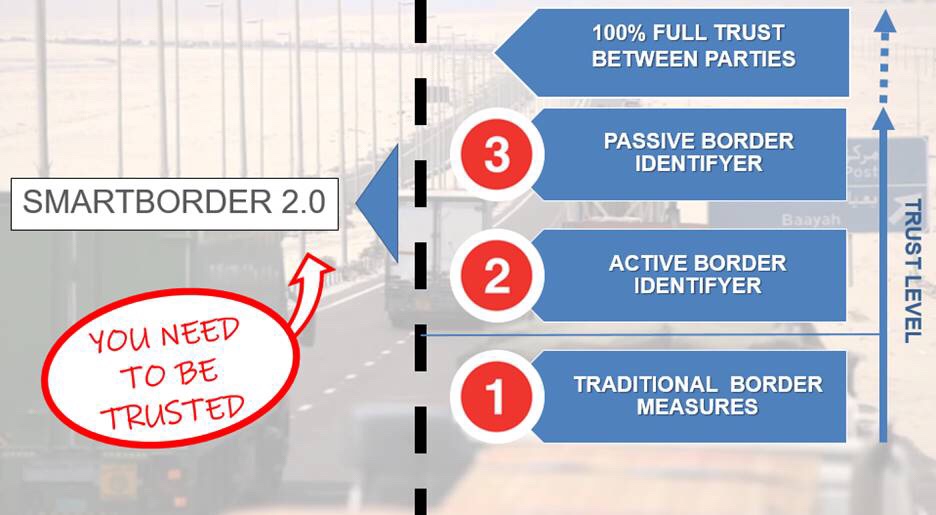 The level of trust decides what border identifier to use. A solution could be to use the highest level of trust on the border between Republic of Ireland and Northern Ireland while using trust level 3 on all other borders.

What it takes to do it

Let me underline that this model is more about a change of processes and working methods (customs techniques) than technology. Especially at the Irish border.

Thee are still a need for a soft infrastructure to be designed, developed and implemented. Government agencies needs to work diffrently than invthe past, private sector needs get a registration and to change behaviour. There are additional costs involved.

How long can it take to implement such a model? Can the model be implemented during a potential transition period? My answer us yes, it can. As stated to the UK Parliament.

What it takes to do it? Political will on both sides.

A second misunderstanding of my proposal is the Trusted Trader programme that is propose to use in the Smart Borders 2.0 proposal and how it is different from the existing Authorised Economic Operator (AEO) programme in EU and United Kingdom. AEO is model where Customs administrations – in line with an international standard – certifies companies based on risk mapping and validation of specified criteria making sure that these operators have a high level of compliance and security and a low risk. In return, AEO companies are provided with simplifications and facilitation (speed, predictability, service and lower cost) for proven maintained compliance levels and low risk.

Let me be 100% clear here. The Smart Border 2.0 cannot be implemented and offered to enough of companies using the present AEO model. This will not provide a model that can be scaled and used in a systemstic way.

I am proposing a new Trusted Trader programme is developed. Trusted Trader is a wider concept in line with the international standard, embracing the more traditional AEO concepts. The present EU AEO programme, also used in UK, celebrates 10 years this year. It is legacy system and I was involved in the process of building that programme a long time ago.

The international standards that regulates AEO is the World Customs Organization (WCO) SAFE Framework of Standards. The WCO member states (today 182 countries) adopted the standard in 2005.

All of the early adopters and older AEO concepts have similar structure and the same challenges. Threshold are too high, the cost to join is too high and the benefits for companies are too few. Still there are almost 50.000 companies in the world that have applied for and maintains AEO status; a large number of these companies are located in the European Union. Today more than seventy countries have operational AEO programmes. Many more are building new modern programmes as we speak.

The new and modern AEO concepts – or Trusted Trader Programmes, which is a more appropriate terminology, developed the last five to six years are very different from the older models. If you want to know more about the differences between an AEO concept and a wider Trusted Trader programme, I recommend you to read an article that I wrote for the leading academic journal in the Customs world, the World Customs Journal [click here, World Customs Journal].

So what would a new UK Trusted Trader Programme (TTP) look like? This is my proposal: 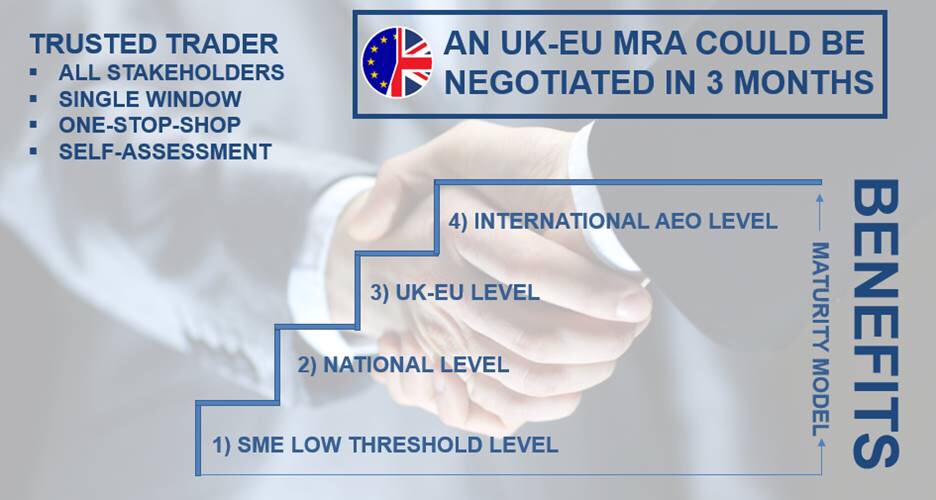 UK needs a modern multi-tier TTP, based on fully digital processes, low thresholds, advanced automated monitoring and a state-of-the-art attractive benefit programme, embracing the present AEO companies, and with a strategy to sign technical mutual recognition agreements with all trading partner, EU and in the rest of the world.  Technical Customs Agreements are much faster to negotiate than Free Trade Agreements.

It is likely that the three pictures above – the “missing link to a frictionless border” – would have made my original report even more understood, however it is never too late to clarify an idea. So let us for the record call this updated model presentation, Smart Border 2.1.

Needless to say, there also must be a specific model for the border economy. People living on or close to the border and moving back/forward every day. There are different solutions also to this challenge since this type of situation also exists in other places.

Finally, I also want to make a comment about another border proposal that has been made by a colleague in the business.

I do this since the two options sometimes are mixed up and discussed as the same solution.

Dutch broker Hans Maessen has in a SGS report, “Drive through Borders: A Comprehensive UK and EU Customs Strategy for Brexit” presented a similar approach to the one I am writing about, moving the formalities away from the border. I think that this is a good and constructive proposal with merit.

In comparison with Smart Borders 2.0 Maessen propose to use more traditional customs systems and techniques primarily through utilizing the transit procedure.

This model would solve some of the problems of the Irish border if/when United Kingdom joins the international transit convention, but it is different from my proposals since it would still demand technology at the border where the transit document/barcode has to be scanned in line with the concept using some kind of reader (= infrastructure).

I do believe that it is stated by both parties that new infrastructure must be avoided (if possible) and the solve the extremely sensitive border between Northern Ireland and Republic of Ireland in a ‘frictionless’ way.

In addition a transit based model also drives the price higher for the users – exporters and importers – since the transit movement comes with a cost on the top of the already calculated cost of export and import declarations. This might not be a problem, but could be.

The cost for traditional import and export declarations used post-Brexit has been estimated by Secretary Thomson HMRC to £17bn-20bn in a hearing in front of the before the Treasury select committee earlier this year.

I believe that the solution proposed by Maessen shows that there are different instruments that can contribute to a frictionless or low fiction border solutions, also using more traditional Customs procedures.

Hans Maessen stated in his hearing to the House of Commons Northern Ireland Affairs Committee recently that his proposal was more about Customs techniques and that my proposal was more about texhnology. However this is not correct. My propodal is primarily about utilizing modern Customs models based on global border best practices, utilizing existing international standards and Customs techniques. However, we need modern technology to make these state-of-the-art Customs techniques (AEO/Trusted Trader, Single Window, One-Stop-Shop, Coordinated Border Management) elevated to a new level, 2.0.

Can Smart Border 2.1 be the answer to the Irish border challenge?

Yes, I am one hundred percent convinced that this model can solve the border issue not only on the island of Ireland, but also for the huge amounts of goods that passes every hour the English Channel through the Eurotunnel or via the ferries from Dover to Calais.

“Can Smart Border 2.1 be the answer to The Irish border challenge? Yes, it can!”

On the border crossings at the English Channel – and in other places for other transport modes – we can use the modern technology described in my report and in the pictures above on one level below the application at the island or Ireland.

Some people claim that the technical and technology solution I have presented does not exist anywhere in the world. This is not true. All parts and components exists in operations.

UK needs one operational model that can be applied in a systematic and simple way for maximum facilitation and optimal security of the borders. This is important both for EU and UK, for both Government agencies and for traders.

The Smart Border provides that solution.

if you want to read the Smart Border 2.0 report, it is in the public domain and you find it here: Smart Border 2.0: Avoiding a hard border on the island of Ireland for Customs control and the free movement of persons’