‘Karlsson-on-the-Roof’ or in Swedish, ‘Karlsson-på-taket’ is a fictional character in a series of children’s books created by world famous Swedish author Astrid Lindgren. A cartoon adaptation of the fairytale became popular in the USSR with its release in the 1970s. To this day, the adaptations are still celebrated as an integral part of the Russian cartoon industry, with Karlsson being recognised as a national icon, together with Cheburashka and other such characters. 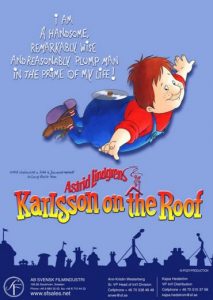 Karlsson is a very short, very portly and overconfident man who lives in a small house hidden behind a chimney on the roof of a very ordinary apartment building, on a very ordinary street in Stockholm. When Karlsson pushes a button on his stomach, it starts a clever little motor with a propeller on his back allowing him to fly. Karlsson is the best at everything, at least according to himself. But there is, in fact, one thing at which he excels: being a playmate to a young boy named Svante, but nicknamed Lillebror (little brother), who lives in the apartment building with his family.

Karlsson is quite mischievous, often getting Lillebror in trouble, but everyone in the end even the boys family, his cranky uncle, and their dour housekeeper grow to like Karlsson and appreciate his sense of humour, energy, and good nature.

During my travels around the world I have often been mistaken as this Karlsson, but I can conclude that it is not me and we are not even related. Karlsson is common name in Sweden. However, having said that I do feel some sympathy for the character and the fairytale, even though I personally enjoyed some of Astrid Lindgrens other characters and fairytales better when being young, like e.g. Pippi Longstockning. I must admit that it would have been very practical to have that propeller on my back when travelling as a globetrotter around the world. In addition I do like to go up on the roof on hotels and other buildings to view the sights when travelling, so why not, maybe I am ‘Karlsson-on-the-roof’ after all!