Today it is our biggest holiday of the year, Midsummer Eve.

This is a day to spend with family and friends having a smorgasboard of typical Midsummer food and drinks; like e.g; herring, salmon, potatoes, meatballs, strawberries and vodka. 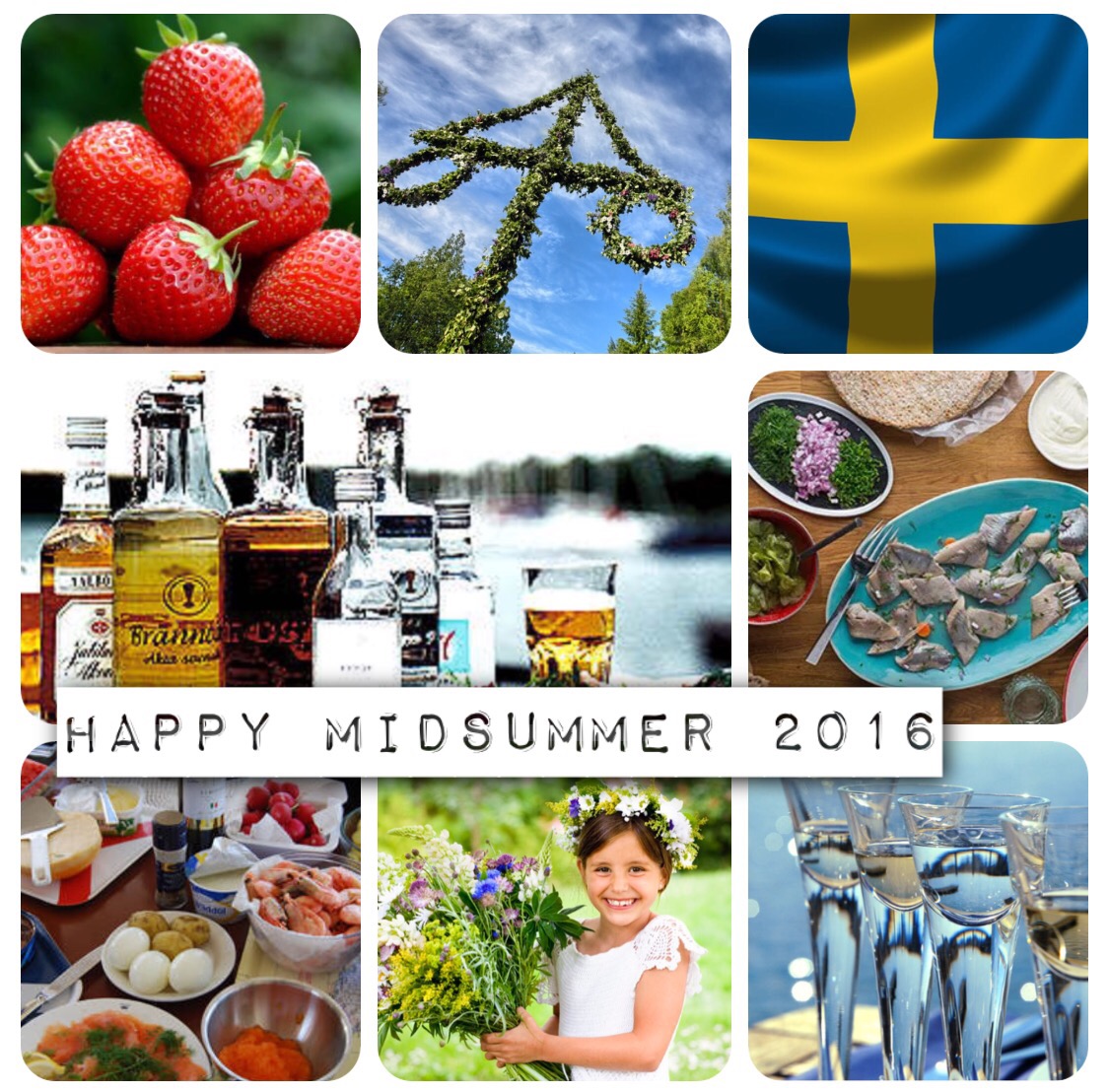 ﻿
In Sweden we love Midsummer. This is our holiday – a bridge and tribute to our viking history.

So now it is over – UEFA EuroCup 2016. This was a tournament where Sweden were desided to play in a tough group and most people didn’t have too high hopes for this team. However, football is a strange game so you never know. Our chance was to win the first game against Ireland. We got a draw, 1-1. We then lost to Italy after a very close game, where Italy scored 1-0 in the 88th minute. 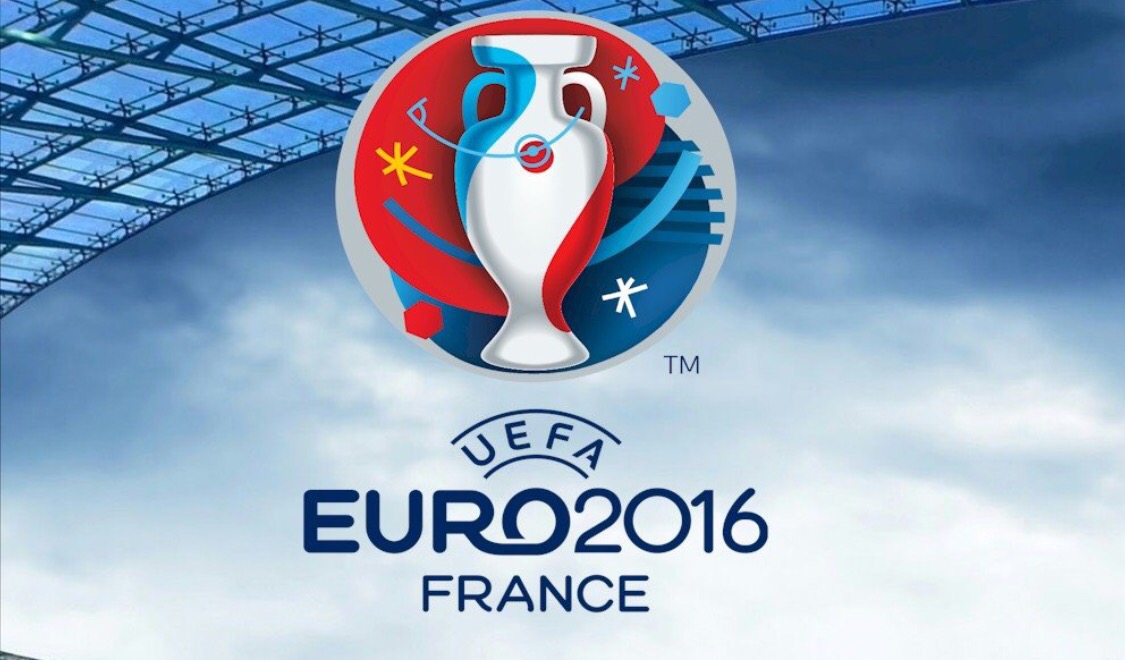 UEFA EuroCup 2016 will continue without Sweden

Yesterday Sweden played the last game in EuroCup 2016. In the third group game we played Belgium ranked #2 in the world. It was a very important game. The winner was going through to the knock-out round. The team that lost was out.

We did our best game of the tournament. We played an equal game with Belgium -and really any of the two teams could have won. 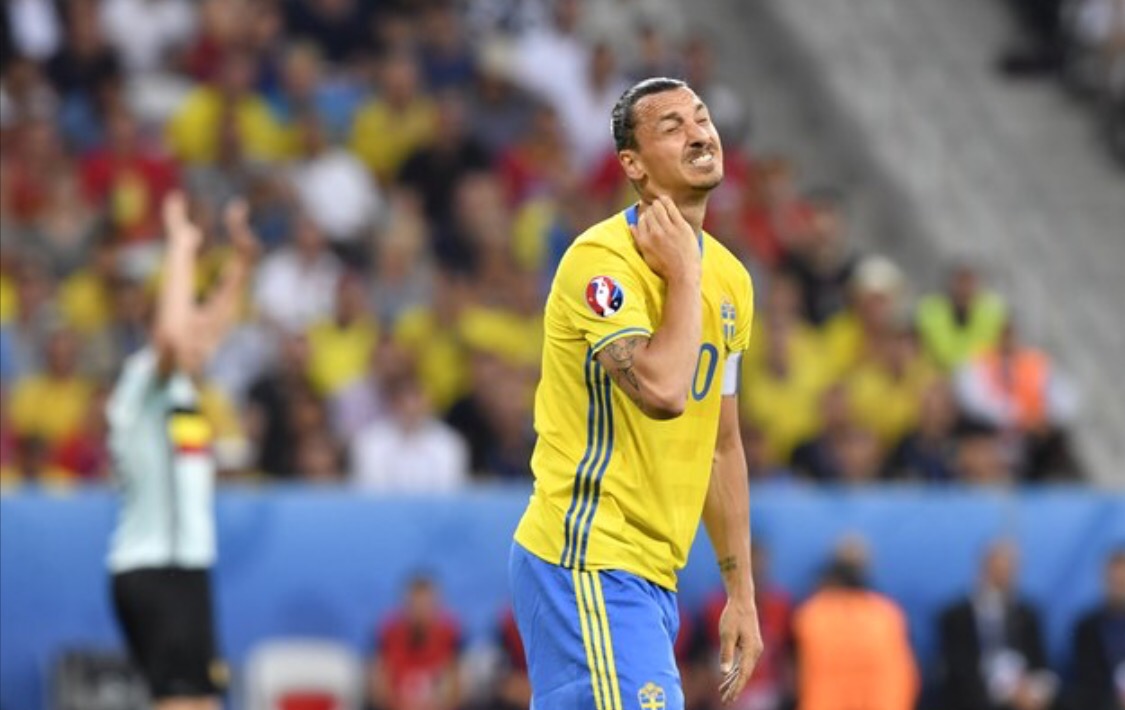 Four great chances for Zlatan, one correct goal – wrongly disallowed by the referee

Sweden had a correct goal scored by Zlatan Ibrahimovic disallowed in the 62th minute. We had a lot of chances. Belgium had many chances too and finally it was Belgium that scored the only goal of the game in the 85th minute of the game, a devastating result for us. Sweden is out. 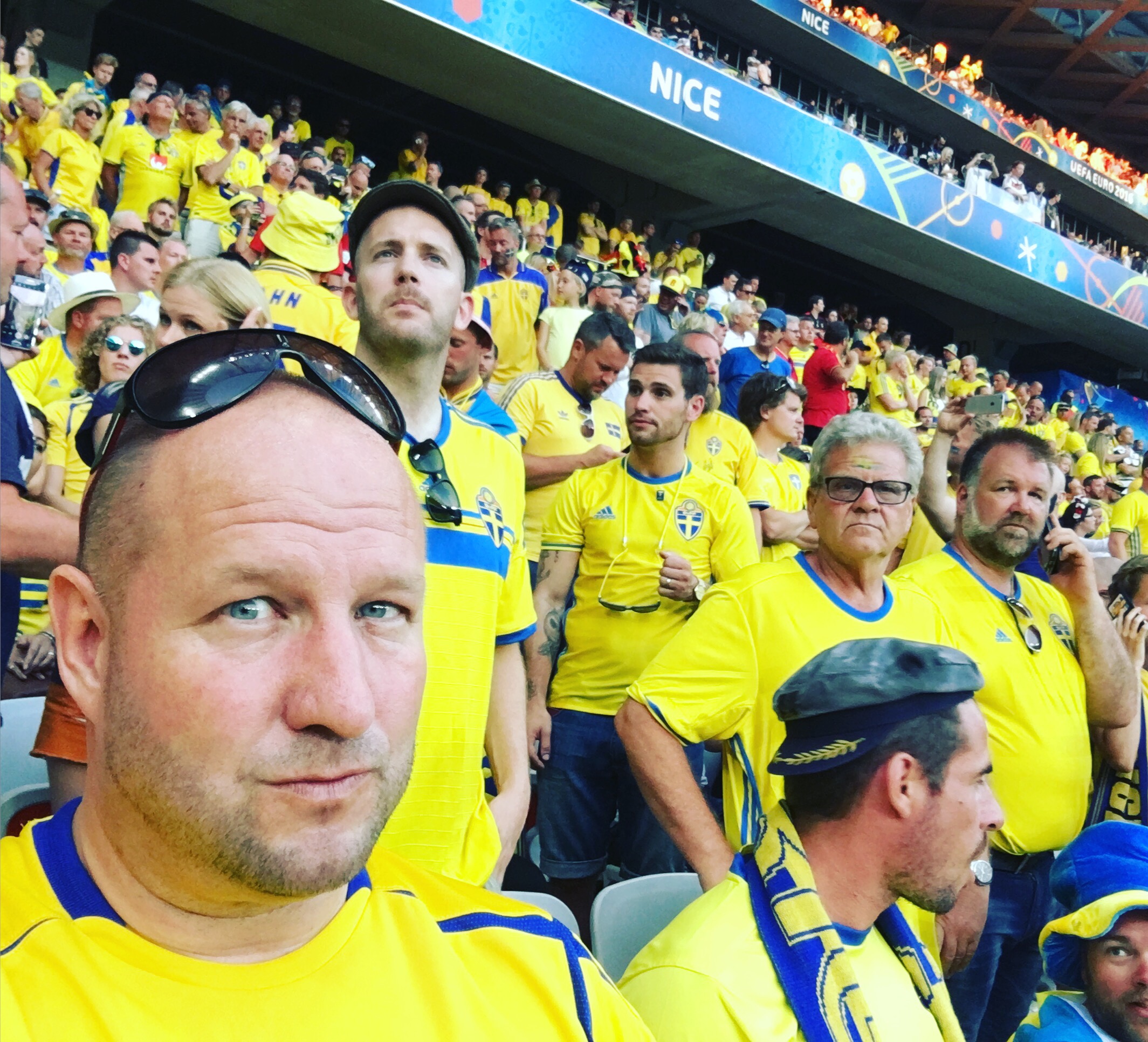 I went to Nice with my son and my brother-in-law. Once a long time ago, in another time and underr difficult circumstances, I promised my son that we would go and see Zlatan play in the national team in a big football tournament. Not I kept my promise. I always keep my promises.

We were there to see the game at the Allianz Riviera Stadium in Nice, France.

In front of full stadium we saw a great game and despite the result it was a great experience. I love watching football live. 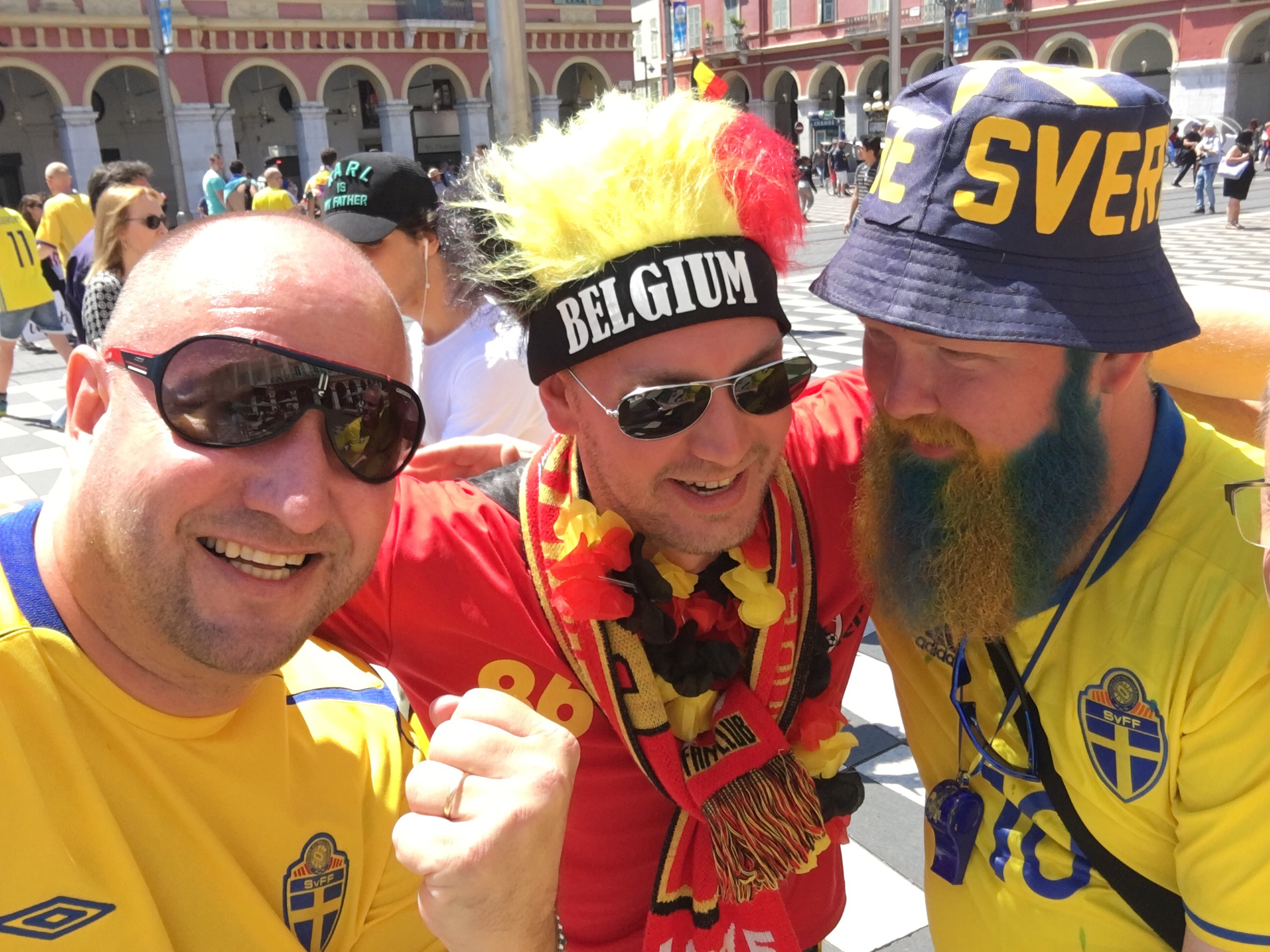 Swedish fans and Belgian fans were friends all through. This is what football should be like, we are all part of the same family. We all love football. 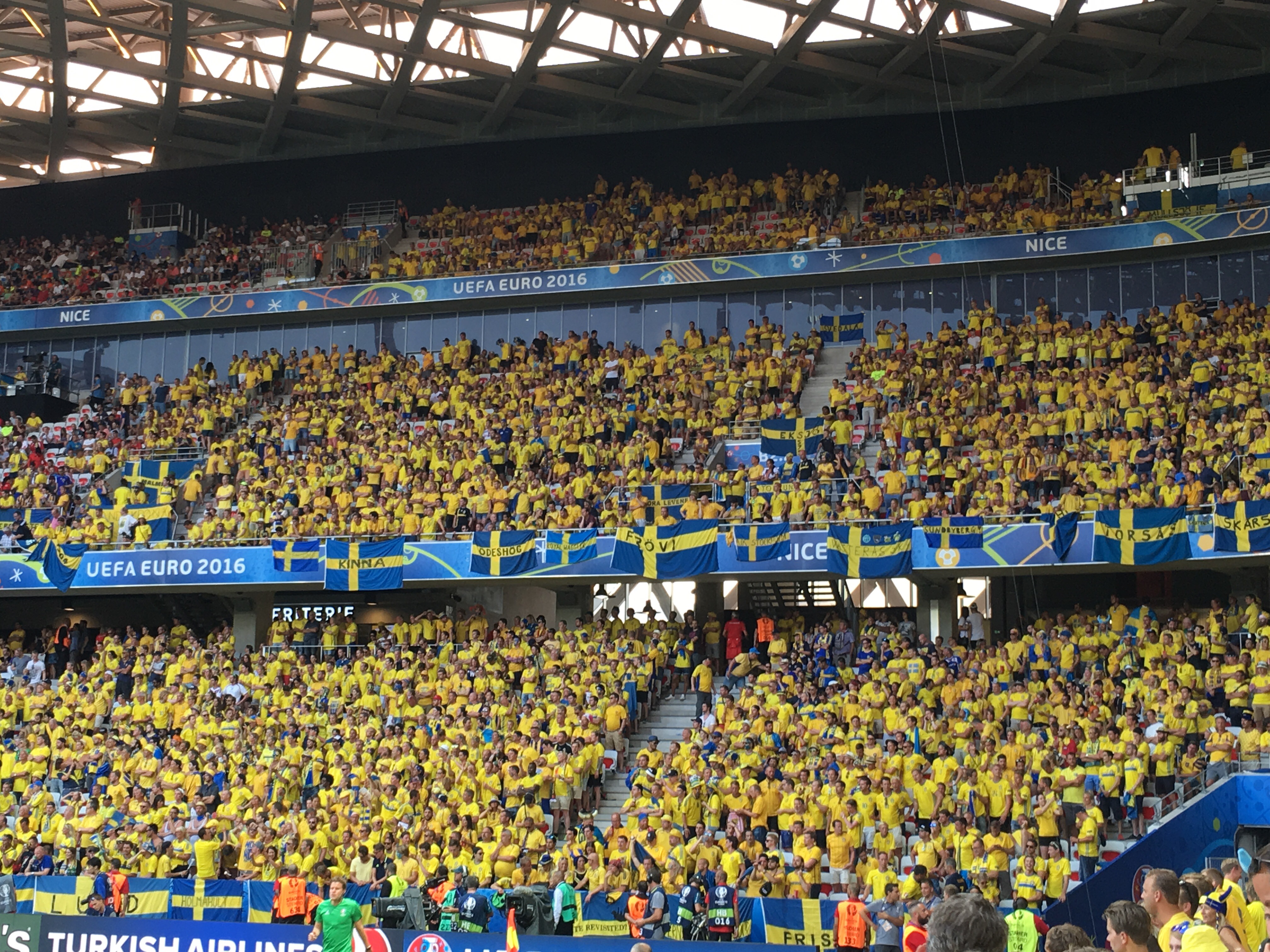 Many thousands of Swedish people in Nice

In the stadium – BYW it is a very nice (!) arena – the Swedish fans, owning 2/3s of the stands, won the game against the Belgium fans. 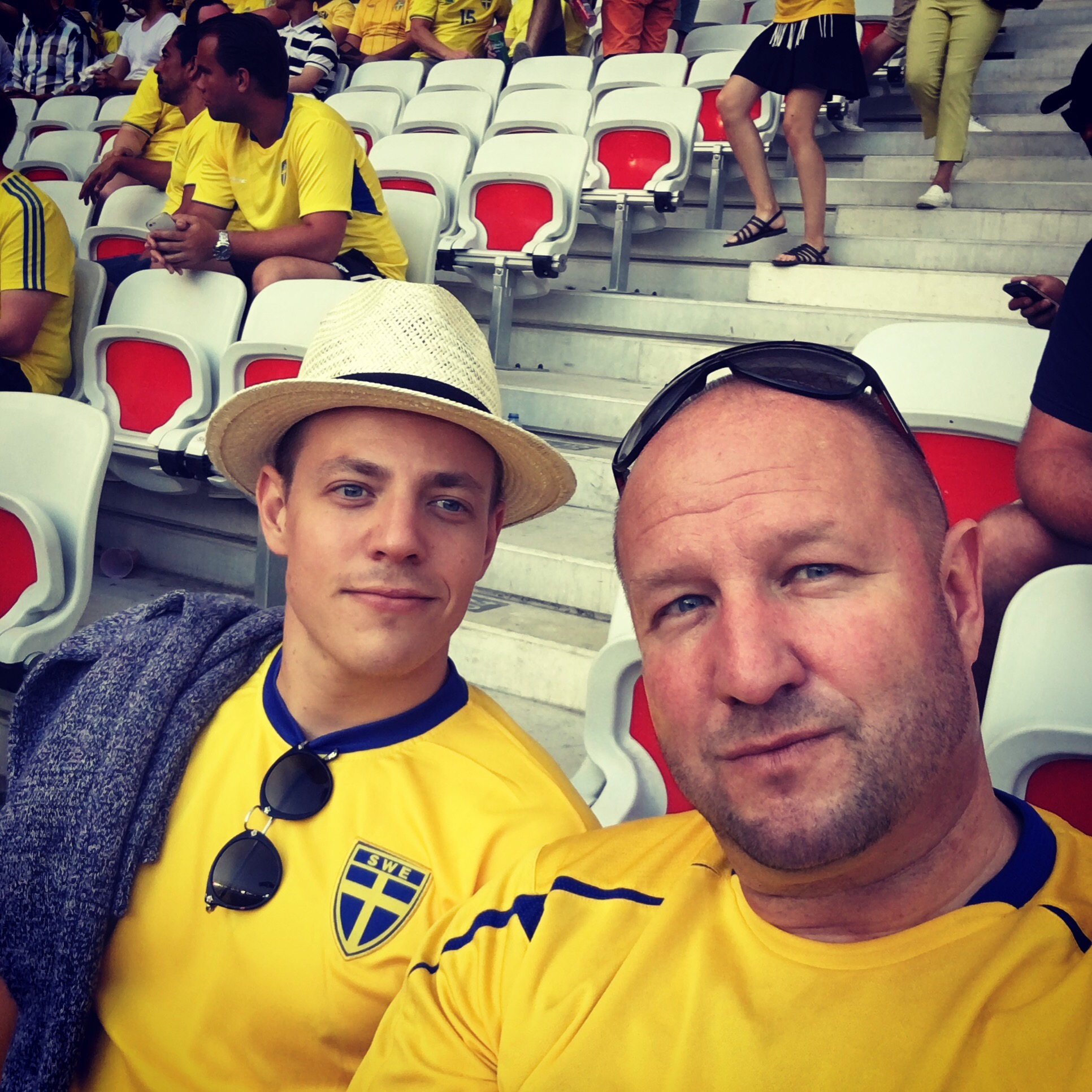 My son and I at the game in Nice

However this was not only the last game for Sweden in the 2016 EuroCup. It was worse than that.

This was also the last game in the national team for our captain and best football player ever, Zlatan Ibrahimovic. 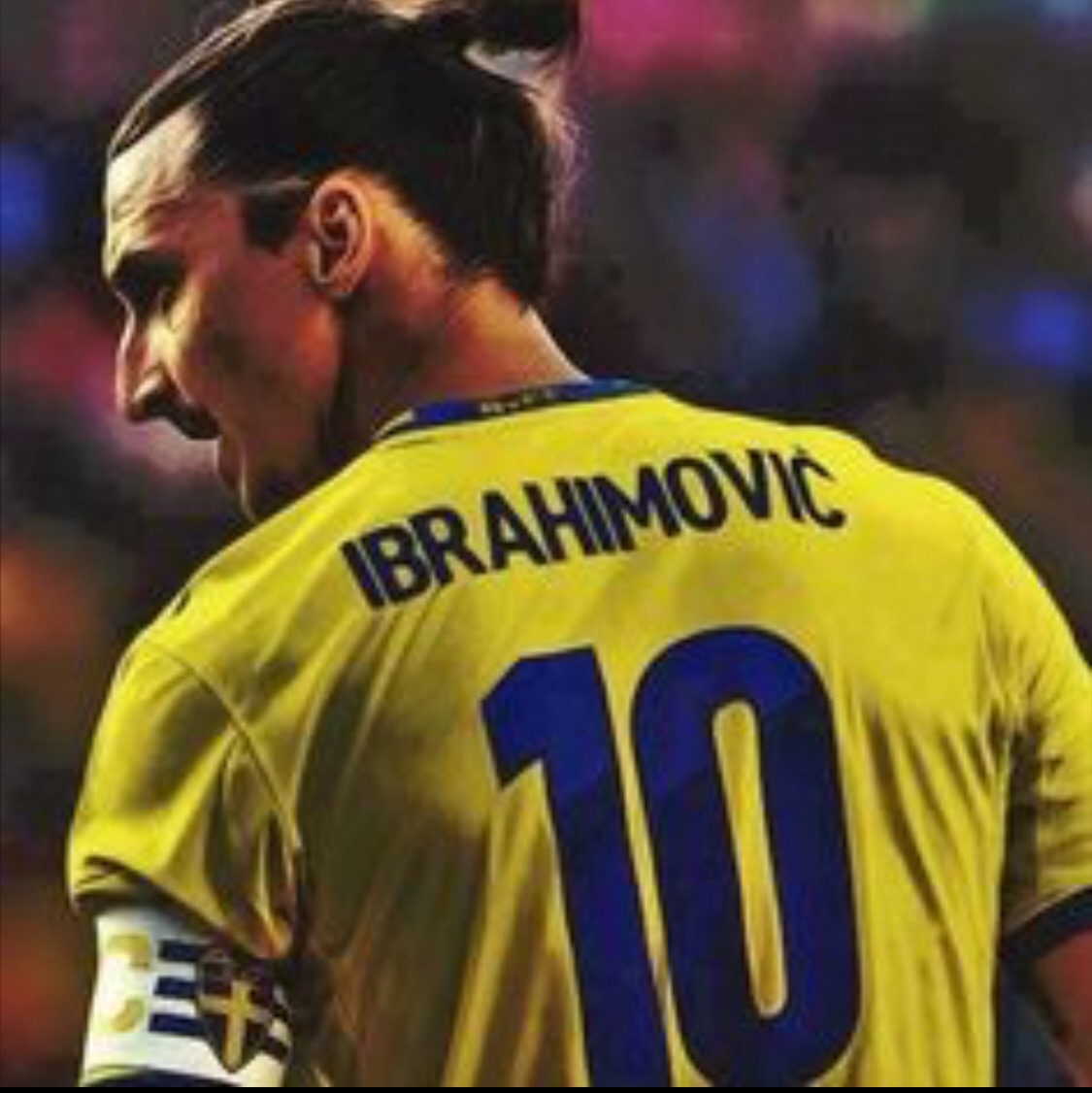 The best football player in the world

I am devestated that Zlatan Ibrahimovic now will stop playong for Sweden. However, we knew that the day would come. Zlatan has changed Sweden in so many ways, not only football. He is an icon, a symbol – the most well known Swede in the world. I love this player. I am grateful to have lived to see him play.

These were Zlatans word after the last game:

“I came from the place that people call ghetto Rosengård, I conquered Sweden and made it my country. In my own way. I’m Sweden. I want to say a big thank you to the Swedish people – without you it would never have been possible for me to fulfill my dreams. You made me your captain. I will always have a yellow/blue heart. I love you.”

A giant. I miss him already.

In the shadow of the political turmoil, Brazilian Government agencies are transforming quickly towards international best practices. The Federal Revenue Authority (Receita Federal) and Brazilian Customs is In the forfront of this development. This is very promising for the Brazilian economy and business environment – and necessary since many Brazilian companies have suffered from the crises the last year. 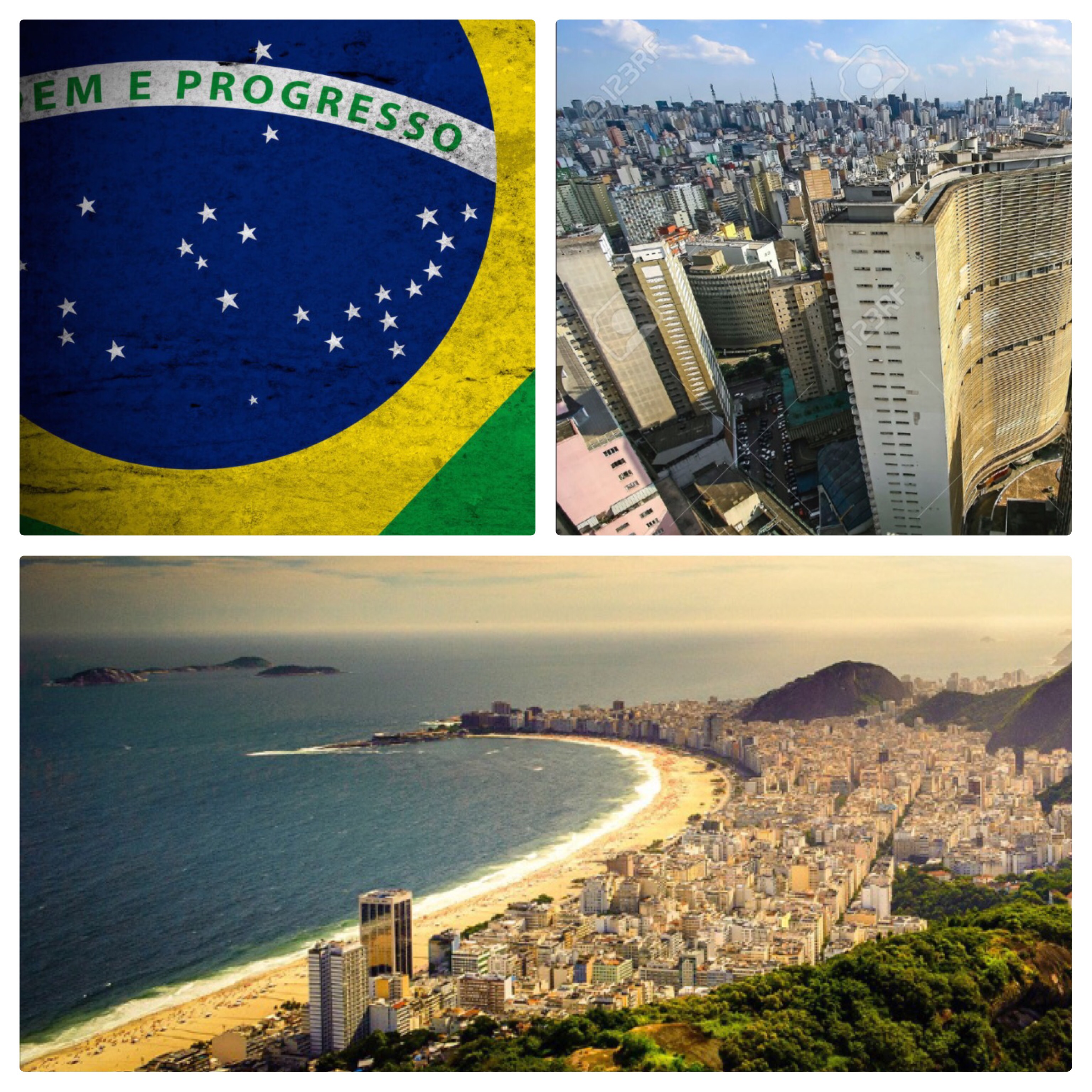 Brazil, the country of the future

So how can the private sector embrace these new changes and utilize the tremendous opportunties provided by the inteoduced new system? 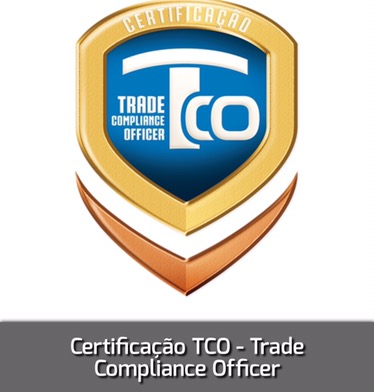 A new academic model has been introduce to adress this challenge, the Trade Compliance Managment certificate education bringing students to a high ijternstional level of knwoledge and expertise. The first curse of the programme with 30 students from the Brazilian private sector – and also some Customs officers from Receita Federal – started on 18 June. At the end of the year the first students will be graduated from this excellent programme. A number of highly acknowledged professors and tutors from Acadamia, Government and the private sector are attached to the programme.

It is ICI.br that is the main organizer of the TCO, but also Allianca Procomex and KGH are sponsoring the programme. 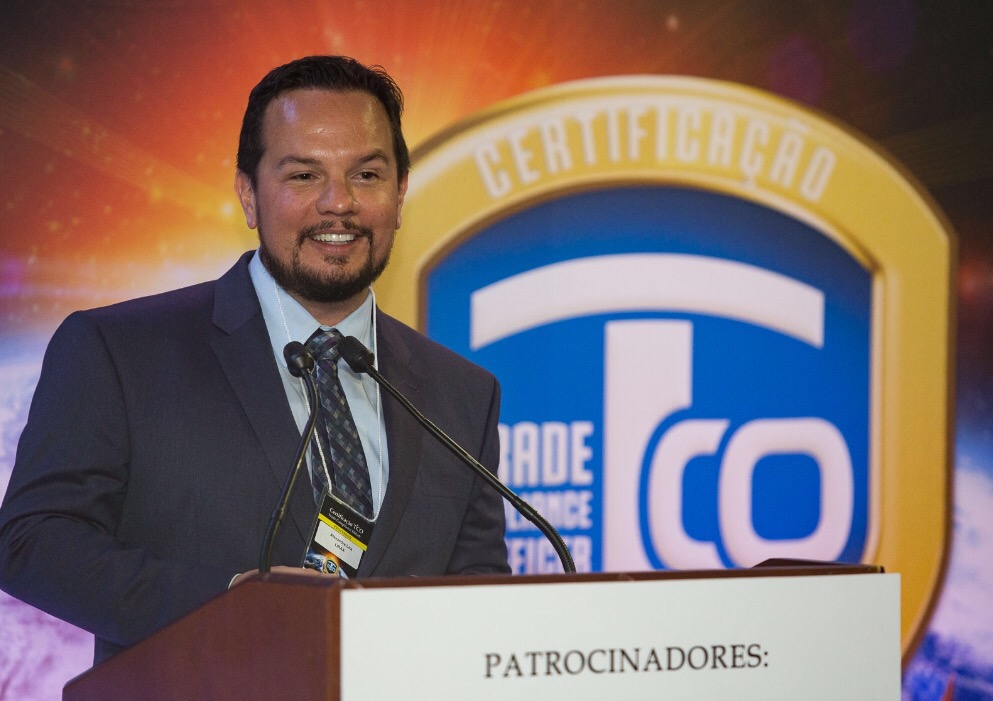 I am Professor and patron of the TCO academic programme. Don’t miss to sign up for the next programme that starts early next year.

The intention is to offer the programme also to other South American countries over the next time period to come.