Sweden Heads The Best Countries For Business For 2017

United States is not the best country to do business in anymore. In fact it has been several years since the United States was at the top of Forbes’ annual list of the Best Countries for Business.

One country headed in the opposite direction is Sweden, which moves up four spots to the top of the charts for the first time (Sweden ranked No. 17 in 2006). Over the past two decades the country has undergone a transformation built on deregulation and budget self-restraint with cuts to Sweden’s welfare state. 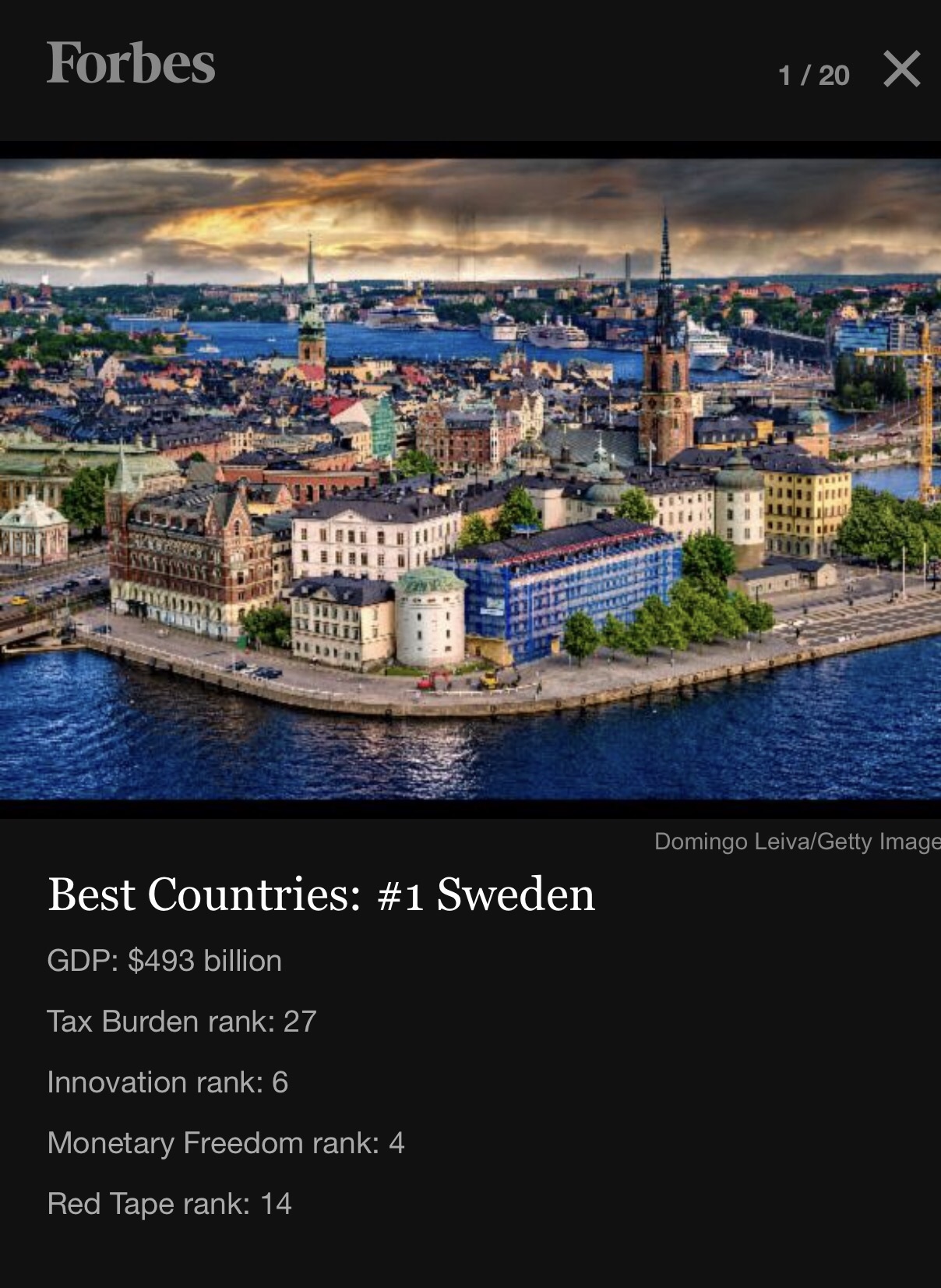 Sweden’s government shrank jobless and disability benefits to encourage employment. The lower benefits allowed for tax cuts. The inheritance tax was scrapped in 2005 and the wealth tax was canned two years later. Taxes are still high relative to the rest of the developed world, but taxes paid as a percent of profit are down eight percentage points over the past decade and the country’s tax burden rank in the World Bank’s Ease of Doing Business has improved 11 spots during the time.

Sweden’s $493 billion economy grew 4.2% last year with only Ireland and Luxembourg faring better among countries that placed in the top 25 in our ranking. The Scandinavian nation has a low level of public debt relative to other European Union countries, and it benefits from its free-trade policies. The trade balance surplus was 5.2% of GDP last year. Sweden ranked among the top 10 countries in seven of the 11 categories we measured.

Sweden is home to some of the most venerable, well-known brands in the world, including IKEA, Volvo, Electrolux, Ericsson and H&M. But Sweden has also become a haven for tech startups.

Skype was co-founded by Swede Niklas Zennstrom in 2003. Ebay acquired the video chat application for $2.6 billion in 2005 and Microsoft paid $8.5 billion six years later. Music streaming service Spotify was founded in Sweden a decade ago by Daniel Ek and Martin Lorentzon. The company has 40 million paid users (twice the number of Apple Music) and was in talks to acquire another Swedish music subscription service, SoundCloud, before walking away this month, according to TechCrunch. Spotify is focused on a potential initial offering in 2017 that would be one of the most anticipated IPOs of the year.

Sweden is the home to a pair of companies that created two of the biggest games of this decade. King Digital Entertainment started in 2003 and nine years later launched the addictive Candy Crush Saga mobile game, which was downloaded more than 500 million times. After a 2014 IPO, Activision Blizzard paid $5.9 billion to acquire King this year. Mojang was founded by Markus “Notch” Persson in 2009 and developed the hit block-building game Minecraft. Microsoft paid $2.5 billion for the company in 2014.

This is the 11th straight year Forbes has gauged the world’s economies to measure which are the most inviting for capital investment. We graded 139 countries on 11 factors: property rights, innovation, taxes, technology, corruption, freedom (personal, trade and monetary), red tape, investor protection and stock market performance. The data is based on published reports from Freedom House, Heritage Foundation, Property Rights Alliance, Transparency International, World Bank Group and World Economic Forum (click here for more details on the methodology and the best and worst country on each metric).

New Zealand takes second place in this edition of Forbes’ Best Countries for Business. New Zealand is the smallest economy of the top 10 countries with a GDP of $174 billion, but over the past three decades it has transformed its formerly highly regulated economy into a dynamic free market. New Zealand privatized dozens of government controlled industries like airlines, insurance, banking and telecommunications. It now ranks first for both investor protection and lack of red tape. The country’s GDP rose 3.6% in the second quarter of 2016, one of the top growth rates in the developed world.

Rounding out the top five are Hong Kong, Ireland and the United Kingdom.

Japan, the third-biggest economy in the world at $4.1 trillion, had one of the biggest drops in the rankings, down 13 spots to No. 36, due to declining scores for investor protection and monetary freedom. The Heritage Foundation highlighted the political resistance to scaling back farm subsidies. Japan’s stock market is up 30% since bottoming out in June following Britain’s vote to exit the European Union, but the Nikkei 225 just reached positive territory for the year and is still below its 2015 highs. Japan’s government debt as a percent of GDP is 230%.