Some last words about Cancun 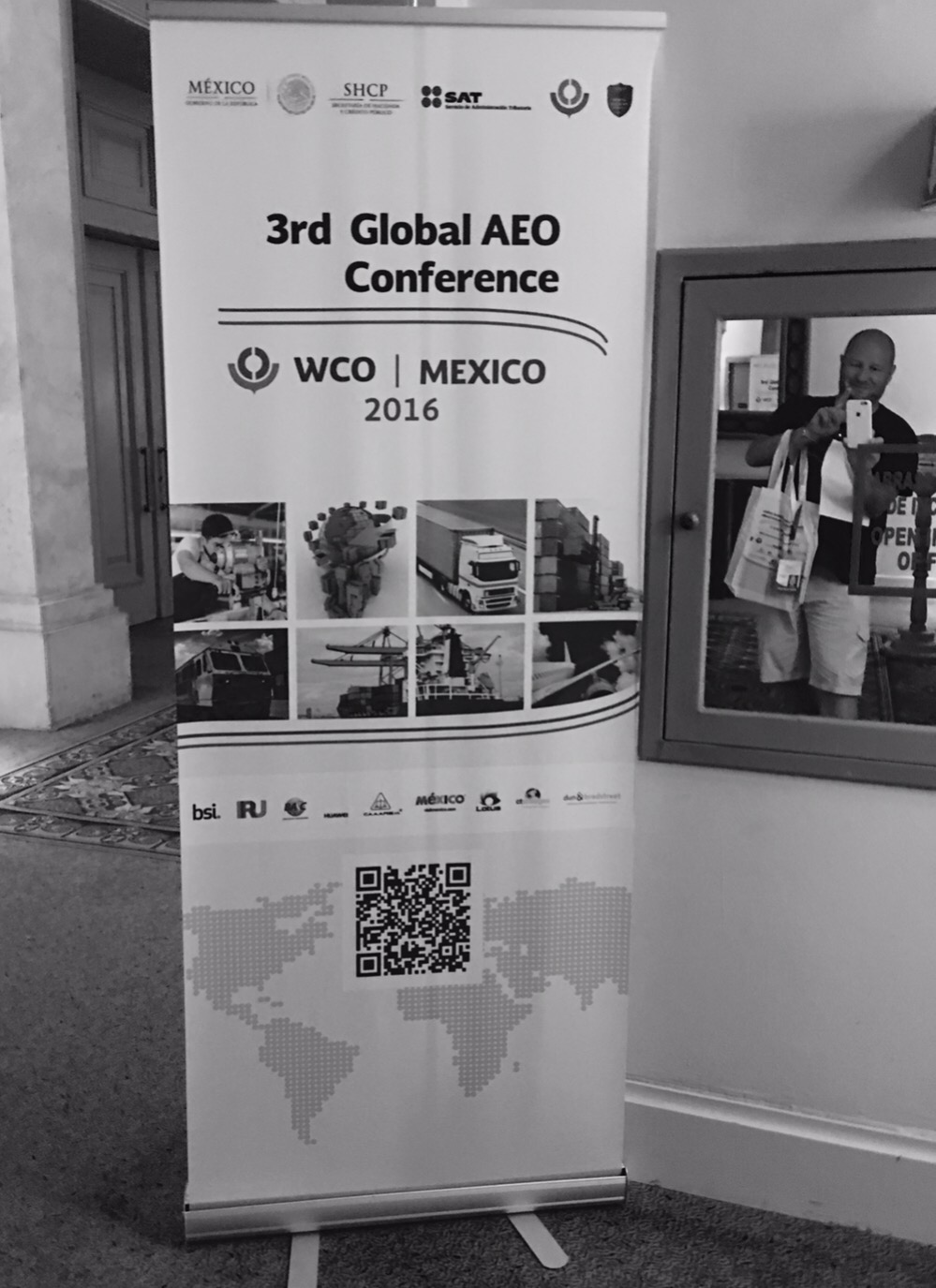 Let me first underline that our Mexican hosts went the extra mile to make this a memorable conference. The organization was world class. Congratulations to SAT Mexico.

For me it was a very special and emotional event. AEO-Trusted Traders is a topic very close to my heart. As many of you know I was the innovator and main architect that designed and developed the original model for compliance management, namely the Authorised Economic Operator/Trusted Trader concept.

Our Swedish models, the Stairway (developed 1998-2000) – including its security module StairSec (2002) – was the first operational AEO programme in the world. We worked closely with U.S. Customs in 2002 comparing The Stairway and (what would became) C T-PAT and signed one of the first pre-MRA in 2003.

I also worked on the WCO SAFE Framework of Standards – in fact the brandname SAFE was my idea and the name proposal was presented at the High-Level Strategic Group meeting in Miami 2005. It is a long time ago and a lot of a water has passed under the bridges.

Seing almost 1300 professionals from Government, Customs, Academia and Private Sector gather in Mexico to talk about this concept was extremely exiting. A dream come through. Just like I enyoyed the conference in Seoul 2012 and the one in Madrid 2014. It was also great to meet so many friends from the Customs family from all around the world. We are truly a family. 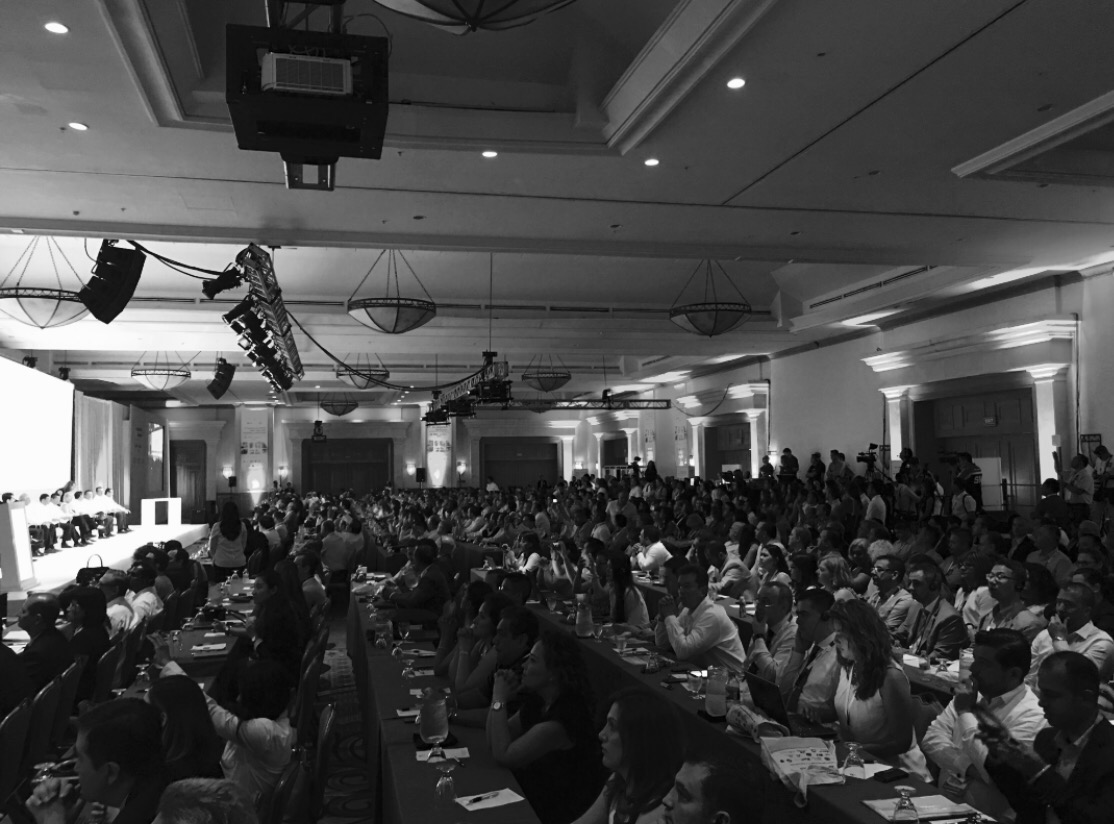 Talking about the content of the conference I was pleasently surprised. However I did meet some colleagues in Cancun that expressed their disapointment about the agenda and focus. There weee some doubts about (in their minds) lacking progress of AEO and the political messages presented in some of the presentations. These colleagues expressed a feeling of lacking leadership, need for more innovation, expectations on more focus on benefits, a missed discussions on how to make MRAs operational. I don’t agree. I told them that. In fact, I strongly disagree. Naturally there could always have been more discussions on all of these topics.

Is there a lack of progress ? We always want things to go faster. I am personally a very impatient man, so I do understand this view. However these things take time. We are talking about a major shift in the world of Customs from transaction to system based controls. Remember that it took twenty years to make risk managment the main control philosophy in customs operations.

In fact my personal opinion is that the WCO Global AEO Conference presented a lot of hope about the future of AEO and the future of Customs, trade facilitation, security and border efficiency. I heard and saw many positive things – in fact I detected a new paradigm emerging like a Fenix from the last decade of some successful examples – but also many maybe promising, but sometimes derailed attempts.

What I heard was the following. I belive that AEO as a concept for the first time in many years is taking leaps forward.

I was impressed by the ambtions of many countries, the willingness and capability to strengten and broaden AEO programmes and implementation. I see a new generation of AEO programmes emerge – combining the ideas of Trusted Traders and AEO, into a new and more holistic model that will become the best practice of the future.

As an example, we heard Australia and Brazil talking about on-the-ground pilot projects with other border agencies testing a Single Government AEO Status in line with SAFE pillar III. This is revolutionary. We have known for many years that it isn’t always Customs that is the time thief and hinder at the border, it could be many other agenecies involved in the import/export process. From a decade of use of the WCO Time Release Study (TRS) we know where the bottlenecks are. For the private sector it doesn’t really matter which agency that is delaying the access to the goods, it is the total release time that matters. Same goes for the competitiveness of a trading nation. A Single Government AEO Status can give us the ultimate benefit, one single interaction with Government, and in combination with a real Single Window it is a dream (that soon will be a reality).

In addition we heard Dubai Customs talk about a very innovative AEO UAE project with 48 already exisiting benefits and new revolutionary features like e.g; AEO for transhipments and free-zones plus new AEO KPIs for speed, predictability and compliance designed by Academia and transparnetly published on scoreboards. This is fantastic.

We also heard many countries display their commitment to AEO and MRA. Another positive message for the believers in the need for international standards for a globalized world. 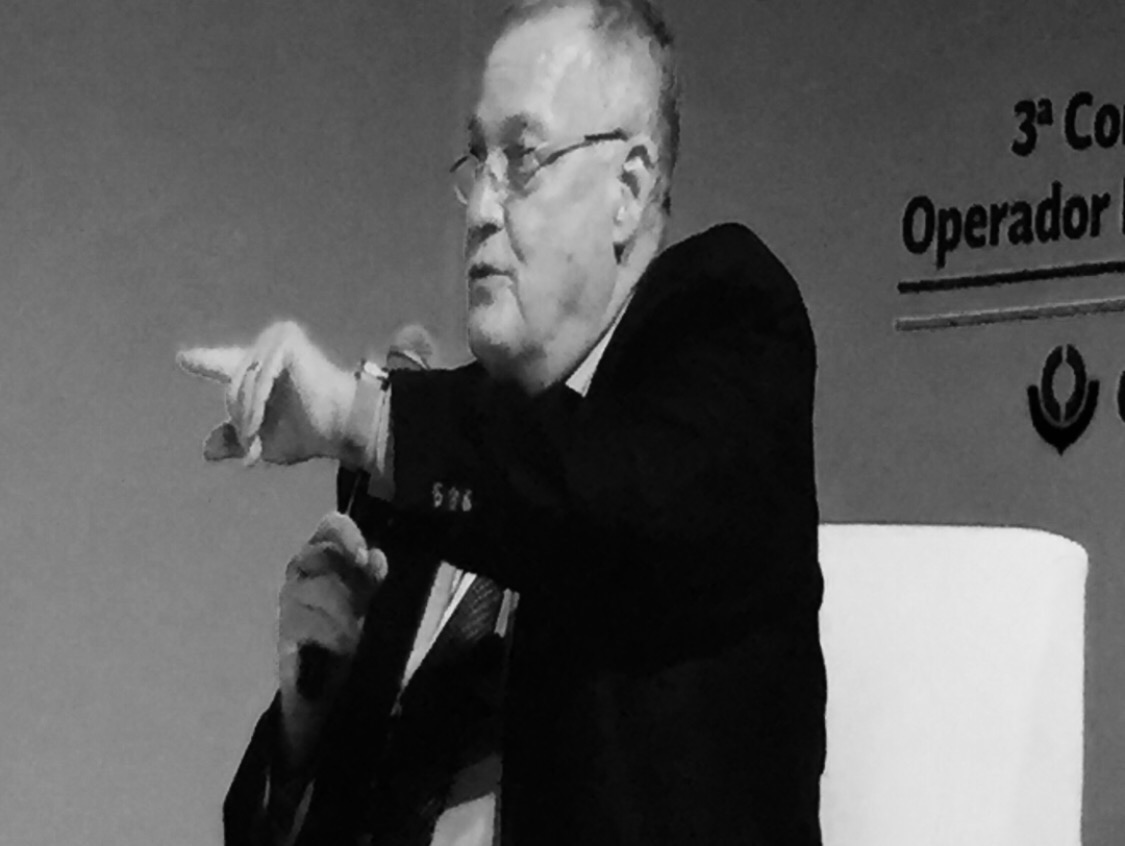 John Mein speaking at the conference.

My good friend, Mr. John Mein – Executive Director for Brazilian Allianca Procomex and Chairperson of the WCO Provate Sector Consultative Group (PSCG) and co-chair of the WCO SAFE Working Group, did an outstanding presentation of the future of AEO from a private sector perspective. I have found that what John doesn’t know about the topic of Government-Private Sector cooperation in practice, isn’t worth knowing. In addition the partnership model that he has developed and spearheaded, which Procomex has used in Brazil and Latin America is a unique method that should be used by everybody all around the world. I sincerely recommend it. It is practical and it works. Contact John if you want to know more about it.

Many countries are also in the process of re-designing and updating their AEO-models, like e.g the United States and the European Union. We are finally seeing AEO taking its role as the future managment instrument and control strategy of Customs worldwide. 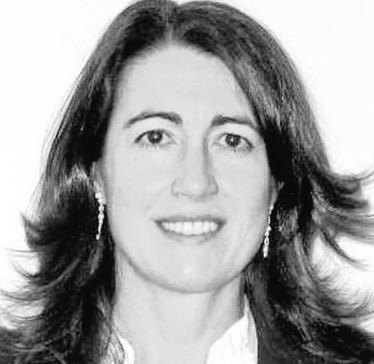 Sandra Corcuera, a great representative for the donor community at its best

Ms. Sandra Corcuera Santamaría from the InterAmerican Development Bank (IDB) presented how effective regional coordination and support can create a better platform for AEO implementation. IDB is the donor that first realized the potential of AEO and their support has been fundamental for the AEO progress globally through excellent work and many projects, primarily in Latin America. Sandra has for many years been a successful advocate for the AEO concept and IDBs support has been very cleverly delivered. We need more of this type of donor engagement in the future.
My good long-time friend, Mr. Allen Gina – former Assistant Commissioner of USCBP and now founding partner of CT Strategies – masterly moderated one of the best panels of the conference delivering 6-7 concrete proposals to the WCO on how to further develop the international standards for AEO. 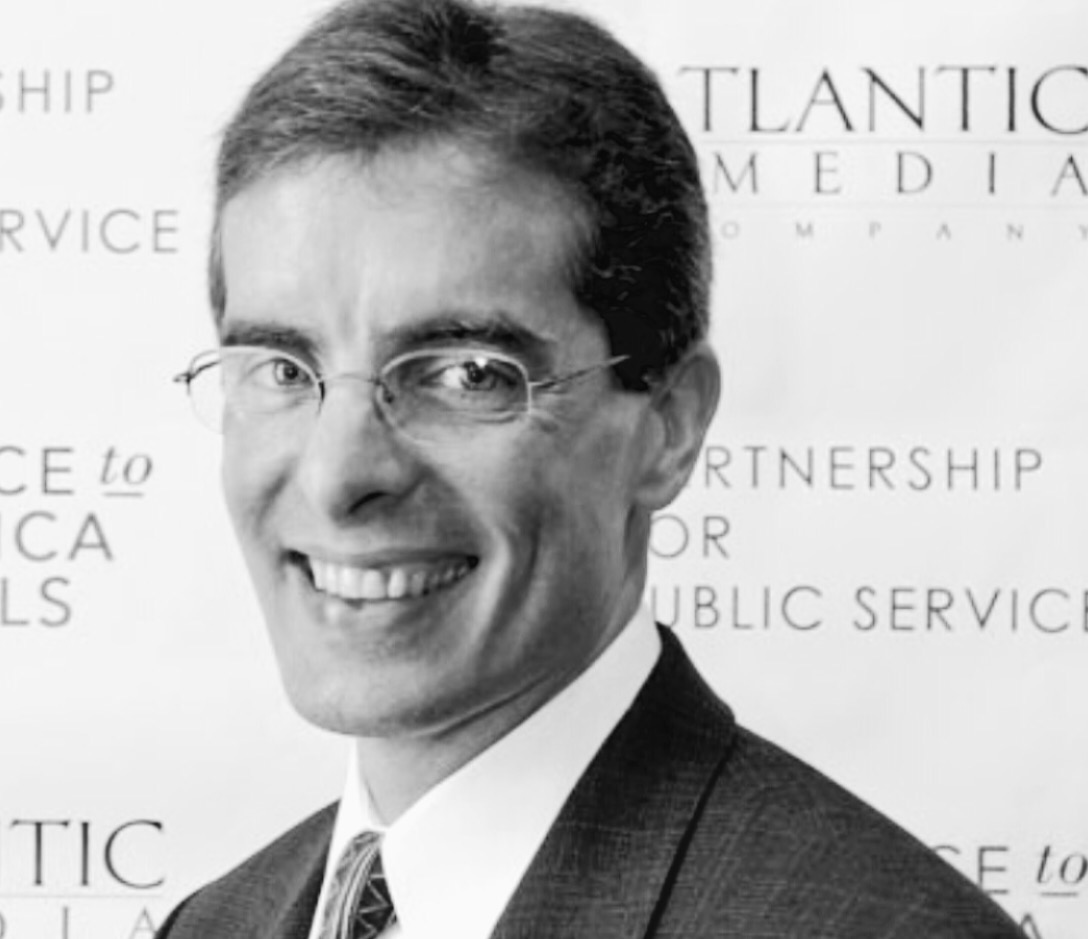 Al Gina, a fantastic Customs leader and a great friend

Al’s facilitation of this panel was one of the high-lights of the event and I know that many other partcipants agree with me.

In fact, I am very proud and honored that Al and CT Strategies is our strategic partner and that we work togeher on AEO design and developement all around the world, Australia and UAE being two examples on our close cooperation.

Finally, the conference showed that the new AEO programmes that are now being implemented are much better than the old ones. This will bring the real private sector engagement back into the equation. It also means that future Mutural Recognition Agreements (MRA) – between countries having holistic programmes with real advanced benefits including both compliance and security – will be better and more operstional than the past ones. This is the key to supply chain efficiency in the future. I am pleased and happy for that. So in summary, I am very optimistic. I loved the conference. 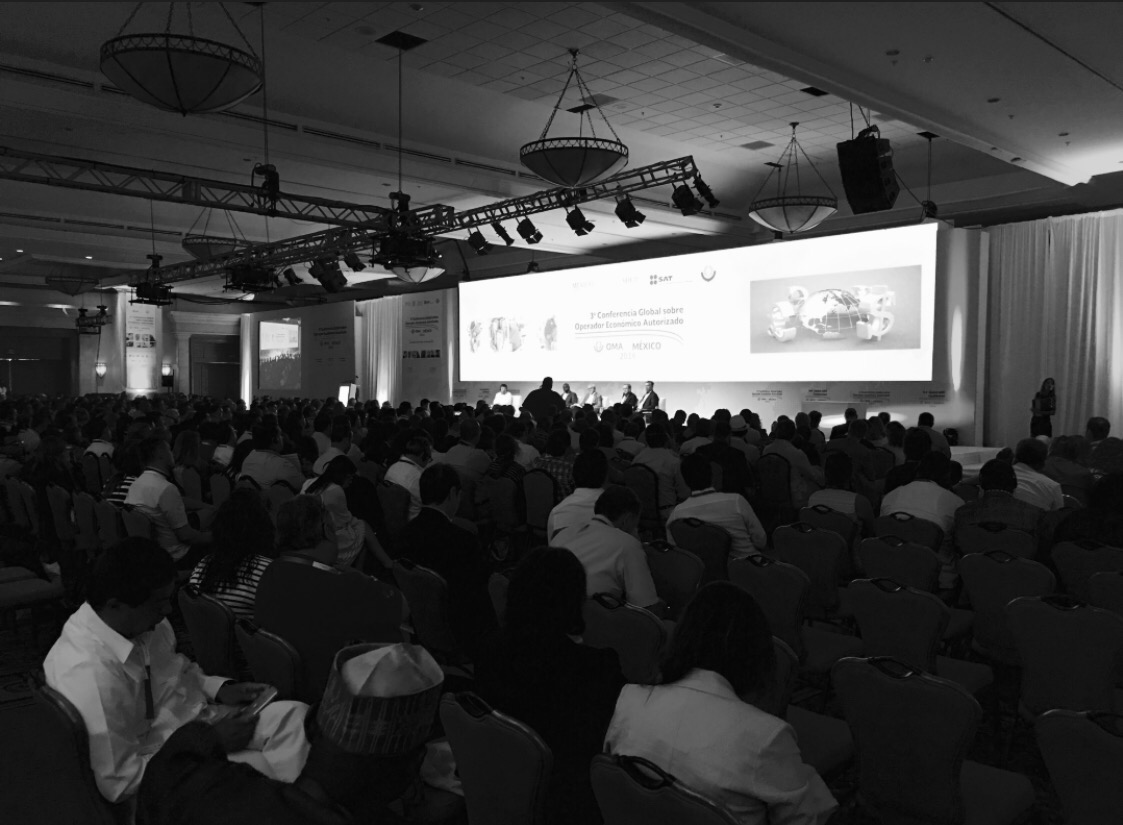 In my mind AEO is the way to the future of Customs and Trade. Having said that, there is as always good news and bad news. Bad news first: We will not have less challenges looking into the future, we will have more. The world today is a stormy sea. It will get worse before it gets better.

The good news is that we now have an instrument to handle these challenges, namely compliance management through Authorised Economic  Operator (AEO) programmes. 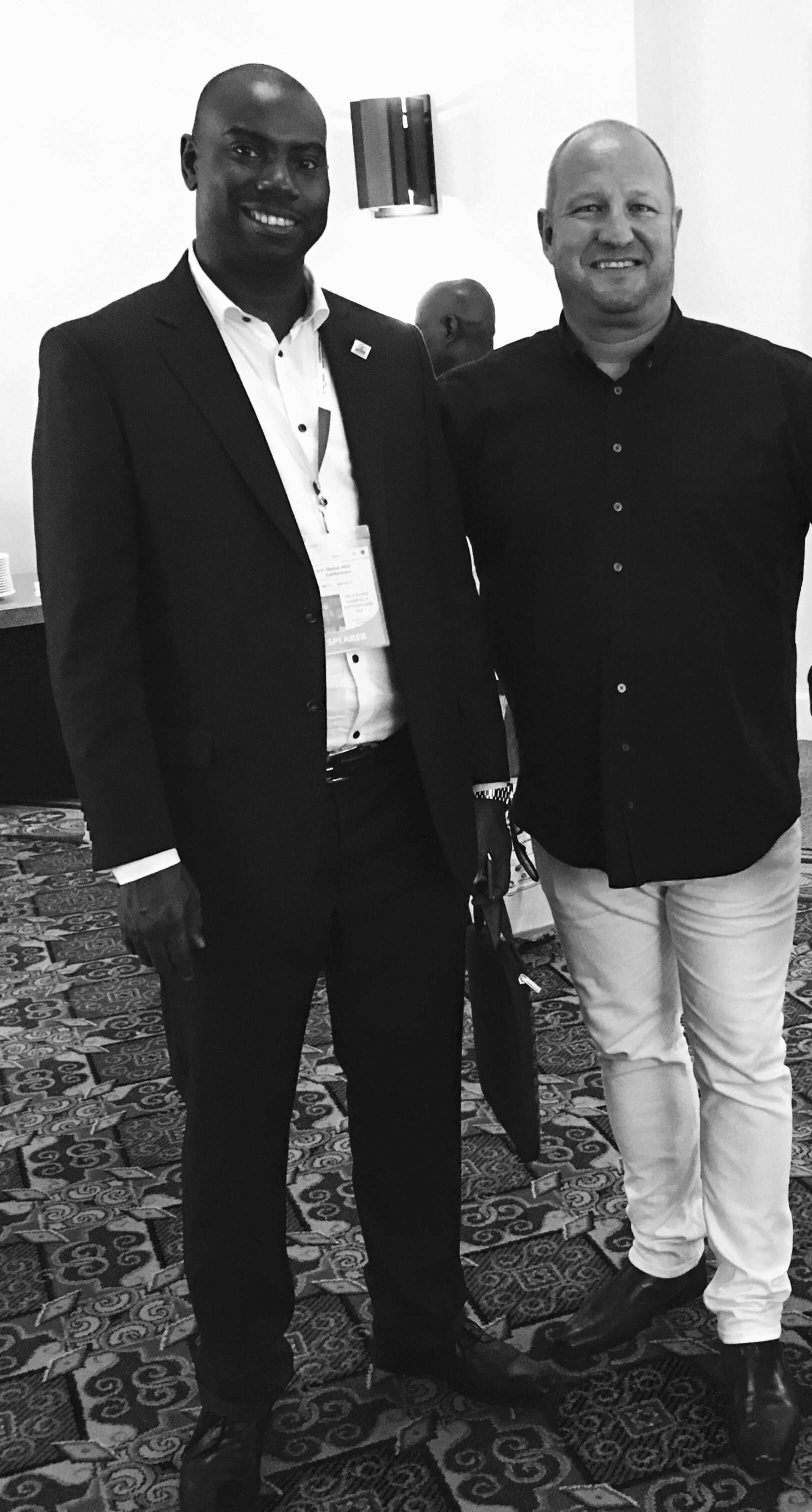 With my friend the Ugandan URA Customs Commissioner, Dicksons Kateshumbwa

In 2018 we will visit Kampala in Uganda for the 4th WCO Global AEO Conference. I predict that at that conference we will see amazing results from the new AEO and Trusted Traders programmes now being implemented. Uganda has been a leader in Africa on AEO and I remember the signing of the first East Africa Community AEO agreement already in 2008 when I was in Kampala as WCO Director of Capacity Building. I know that Commissioner Dicksons Kateshumwa and his crew will do an amazing job in preparations for this event. Dicksons is personally very knowledgeable about and engaged in the AEO concept, so this will be very interesting conference. When I asked him about it in Cancun he said to me, ‘we will have 1500 people in Kampala in 2018’! I like that spirit and attitude. I will be there – you should all go too. In two years time AEO will have progressed tremendously. In addition Kampala and Uganda is very beautiful and a must see.

As A famous rock singer once said, ‘The future is so bright that we got to wear shades’. It is time to buy AEO-sunglasses.