Singham: Britain must not put all its trading eggs in the EU basket

After 3½ years of wrangling, we have finally left the EU and now have our first chance in more than 40 years to start thinking about what we want from our own independent trade policy.

The UK’s future has never looked brighter, but now we are out of the EU we have to embark on a pivotal 11 months of talks to agree a free trade deal, a process that is full of potential pitfalls. 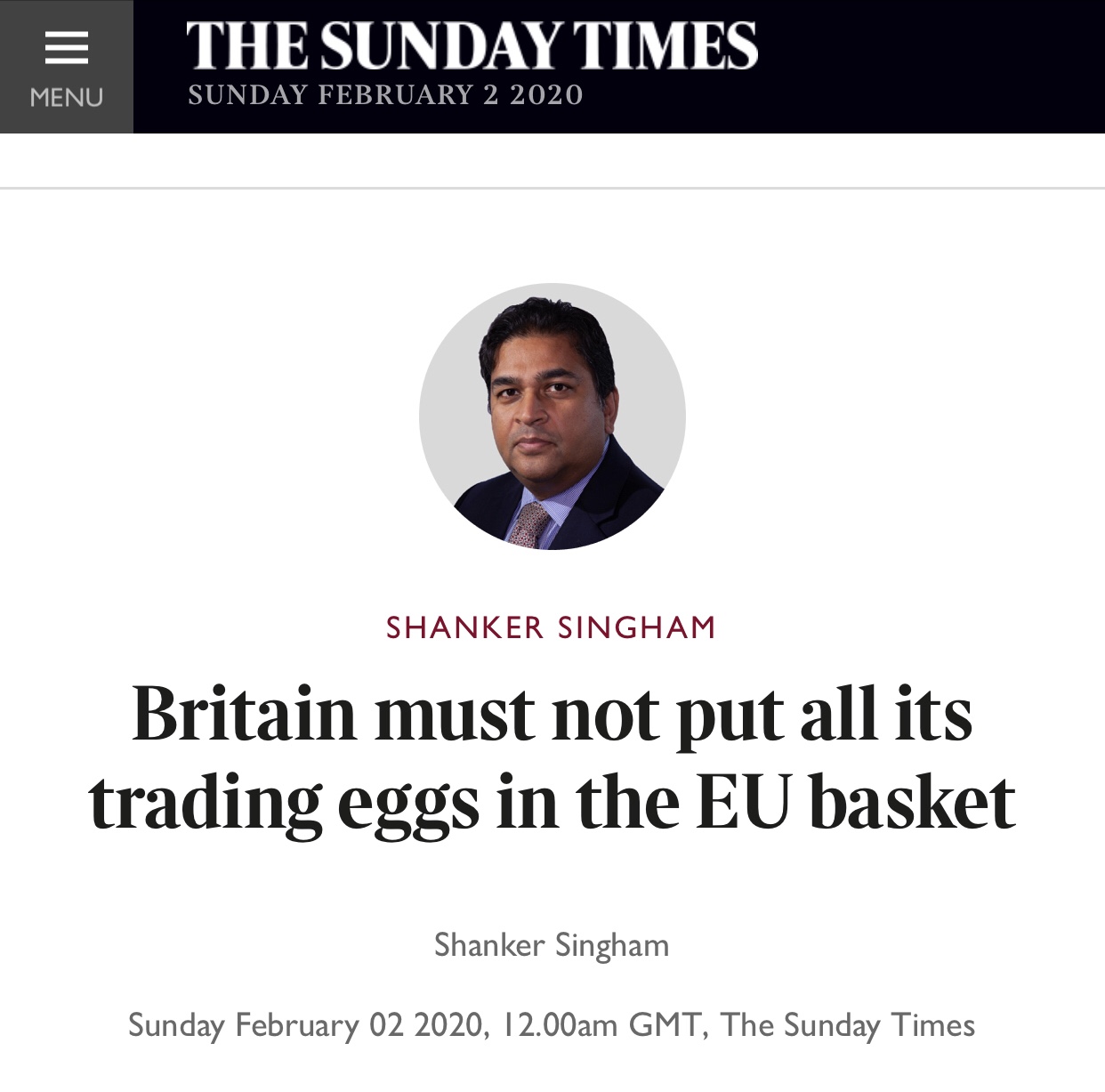 We must ensure that we don’t make the mistakes of phase one, the withdrawal, by assuming that we are on the same side of the table as the EU and allowing them to control the negotiating process. It’s time for our negotiators to change their mindset.

First, to quote a former prime minister, we’ve got to stop “banging on about Europe”. The EU is a key trading partner but it isn’t our only one.

We have an exciting chance to agree our own trade deals with the emerging powerhouses of the global economy — producing 90% of economic growth. The UK needs a balanced, global trade policy which consists of comprehensive free trade agreements with the EU and America, and bilateral deals with Australia, New Zealand and Japan. We should seek to accede to the most liberal platform agreement with the fastest-growing countries in Asia — the Comprehensive and Progressive Trans Pacific Partnership. These talks must be conducted simultaneously and we must not put all our trading eggs in the EU basket.

Second, our businesses have been held back by increasingly burdensome and anti-competitive EU regulations. As we discuss terms with prospective global trading partners, we should use the talks as an opportunity to improve our domestic regulatory system, making it more pro-competition and less trade-restrictive. I don’t mean deregulation, but rather better regulation that works for British business. The economic gains will outstrip even the most beneficial free trade agreements.

Third, as of yesterday, we are now a fully fledged and independent member of the World Trade Organisation (WTO). We have our own seat at the table and can speak up for the interests of British consumers and businesses.

The WTO has taken great strides in promoting global trade and seeks to boost competition, discourage unfair, restrictive trading practices, protect the environment and ensure that less-developed countries have extra time to adjust to its provisions. We should be taking part in its e-commerce, services and domestic regulation working groups, championing our work with the WTO, and make it known across the world that the UK plans to liberalise as it becomes a global beacon of free trade.

Fourth, any trade relationship we agree with the EU must ensure that trade between Great Britain and Northern Ireland works as smoothly as possible. Indeed, the withdrawal agreement itself talks of “unfettered access”. One important way of achieving this will be a rapid development of our free ports agenda, which will immediately begin to show how such trade will work.

Finally, there is much talk about the so-called level playing field, a set of EU rules to ensure that businesses operating in individual member states don’t receive any unfair advantages over European competitors. The EU says it won’t allow the UK to access its markets unless we agree to harmonise our regulations with them. This position is unsustainable and at odds with the way most other countries trade.

Many of our allies are, like us, deeply concerned about the tendency of the EU to export its regulatory system across the globe (the “harmonisation” or “dynamic alignment” approach).

The UK won’t have any problem agreeing not to subsidise its companies for trade advantage, as long as we can create our own anti-subsidy rules and British courts enforce them. Similarly, we won’t want to lower our labour or environmental standards.

None of this requires “harmonisation”, it requires “recognition”. Parties to trade talks, such as the UK and EU, should focus on regulatory goals, and objective methods to achieve them. High regulatory standards can be achieved without us having to sign up to the EU’s entire legislative rulebook.

Take environmental protections. The EU may achieve its regulatory goals and outcomes by asking its businesses and member states to do one thing; the UK may achieve similarly high standards, if not higher ones, by asking ours to do another. Mere technical differences between UK and EU rules cannot be allowed to defeat the flow of trade.

Over the next 11 months there is still a danger to the UK. If we don’t get this right, our economy could be vulnerable. If we fall into the trap of conceding to dynamic regulatory alignment in return for an easy trading life, we will be doing a disservice to the UK’s long-term economic interests, and damaging not only new businesses and consumers, but businesses of the future – the very sort the prime minister wants to encourage. We will have taken back control of our trade policy only to allow the EU to set our rules and regulations.

This does not mean we will diverge all over the place from the beginning — we probably won’t. But we must reserve our constitutional right to do so.