A look at British borders after Brexit

Tony Smith, chairman of the International Border Management and Technologies Association discusses what border control actually means in the UK and the effects of Brexit. 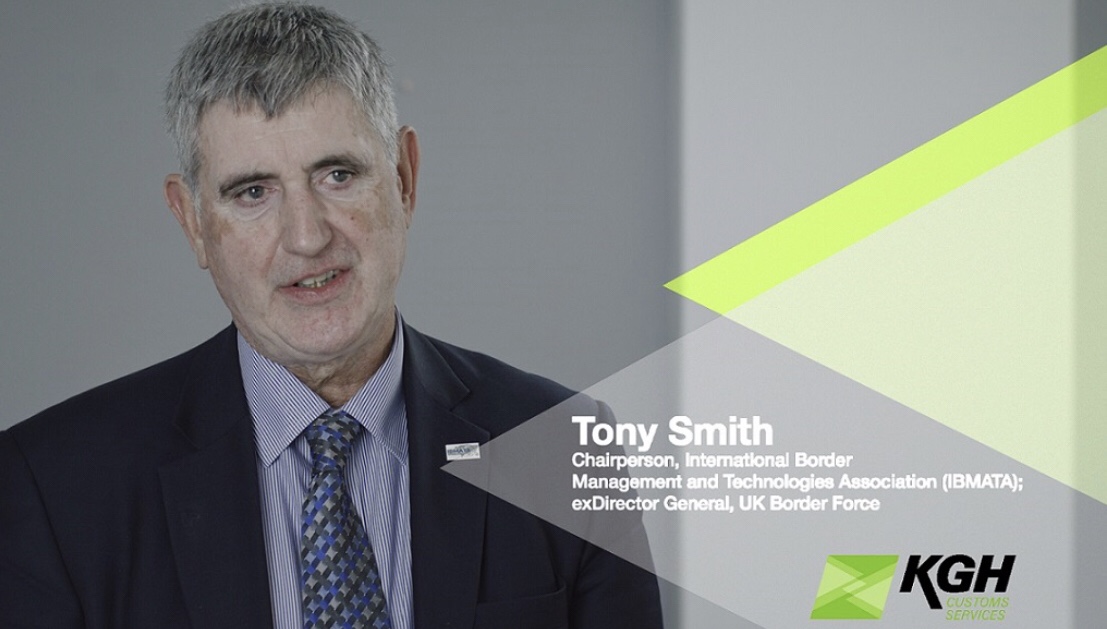 What do we mean by border control and how will Brexit affect British borders?

The UK already has a pretty comprehensive border control system in place; every passenger arriving into the UK goes through passport control where identity is verified, and watch lists are checked. A great number of them are also checked before arrival, through the submission of Advanced Passenger Information (API) by the transportation company bringing them. Electronic exit checks are also in place, the only exception to this is at the UK/Irish border, where the Common Travel Area allows free movement of persons between the UK and Ireland – and the Channel Islands, for that matter.

Unlike most of the other EU Member States, neither the UK nor Ireland is part of the Schengen Acquis, which allows the free movement of people within the Schengen zone. In fact, both the UK and Ireland have a specific opt-out of Schengen – something no longer available to other EU Member States. This means that all EU and EEA passport holders will still go through passport control upon entry to the UK or Ireland; and may be refused entry in certain circumstances relating to public health, public security or public policy. Equally, third country nationals require a permission to enter the UK when arriving from another EU Member State; and this includes a visa if they are citizens of a country on the UK visa list. 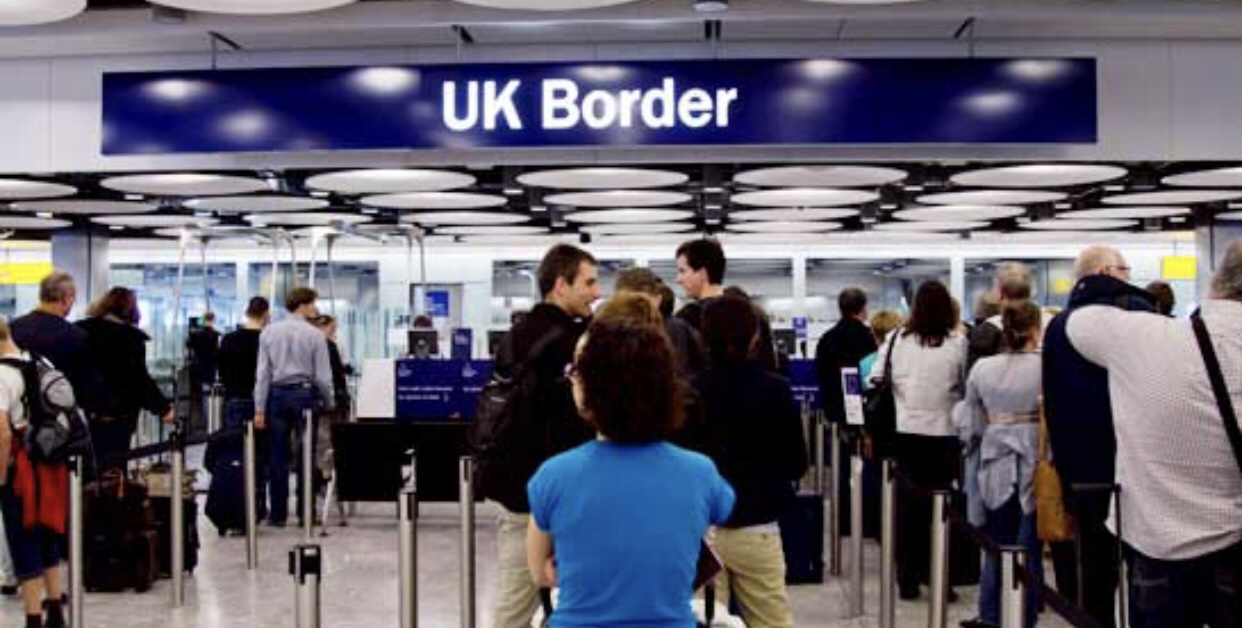 What is the additional element of control that Brexit will bring to the British borders? The CTA will be preserved, therefore – contrary to some opinion – there will be no need for passport controls between Northern Ireland and the Republic of Ireland (although Customs controls are more problematic). Everybody arriving from elsewhere will still go through passport control.

What difference will Brexit make?

The key distinction will be the UK proposal to end free movement of people within the EU. This means in effect that EU, EEA, and Swiss passport holders will require permission to enter the UK in the future. You could argue that they already need that now, however, under current law there is an expectation that all EU/EEA/Swiss passport holders will be admitted at British borders, regardless of their purpose in coming to the UK or their proposed duration of stay. That is not the case for other third country nationals. They require permission to enter the UK and this may be refused if they do not meet the requirements of the immigration rules.

This means that at some point in the near future, all EU/EEA/Swiss passport holders will require leave to enter the UK, in the same way that third country nationals require leave to enter now – they will also need permission to stay. Indeed, the EU registration scheme is already underway, inviting those EU nationals wishing to stay in the UK post-Brexit to register for permission to so.

When discussing taking back control of British borders, what we really mean is taking back control of EU migration. This is beyond doubt a response to rising immigration figures from the EU; and the consequential impact upon UK population growth and pressure upon social services, accommodation and infrastructure in the UK to cope with this.

Ironically, since the decision was taken by the British people to leave the EU in 2016 net migration from EU countries has dropped from a high of 180,00 in 2015 to 74,000 in 2018, suggesting that many EU citizens voted with their feet when they felt unwanted. Oddly, net migration from third country citizens rose to a record high of 248,000 in 2018, the highest figure since 2004. Yet this is an area over which the UK Government already claims to have under control.

It is possible to suggest that the government could take back control of British borders without leaving the EU at all, but by issuing rather less visas and permits to stay than they do now. Something they vowed to do some years ago with a policy intent to reduce overall net migration to less than 100,000 a year. Small wonder there has been a row in cabinet between the new Home Secretary, Sajid Javid, and Prime Minister, Theresa May, over this policy, and a change of tone to reduce immigration to sustainable numbers rather than a set figure.

In fact, many politicians argue – with some justification – that leaving the EU will compromise UK border control. That is because UK membership enables access to several EU systems such as Europol, Eurojust and the Schengen Information System (SIS2) for background checks.

People will always disagree on immigration and asylum policy; however, the majority still need to feel that they have control, and policy can be adjusted in tune with the elected government of the day. This becomes more difficult when the elected government of the day cedes power in contentious policy areas such as this to an unelected supra national authority such as the European Commission. Which is itself wedded to fundamental freedoms of movement of goods, people, capital and services. And woe betide any Member State who dares to challenge that.

The UK Border Force is one of the best in the world, training border agencies across the globe on detection, intelligence, targeting and the like. To say that we do not have control of our borders undermines them and the great work that they do both overseas, at our ports of entry, and inland. But like anyone else they need to understand who is calling the shots on immigration and asylum policy in the UK and what tools will be provided to them to enable them to deliver their mission.

There will never be complete agreement on Brexit. It is hard to imagine a topic that has created greater division in UK society than this. But endless squabbling in the UK parliament – and between the UK and the EU – is not helping, regardless of your position on leave or remain. The restoration of very clear powers to the UK parliament, coupled with consistent messaging and actions from our political leaders, is the most likely vehicle to satisfy people that the government is really in control of its borders – or anything else, for that matter.

Tony Smith CBE is a former Director General of the UK Border Force with over 40 years’ government experience in immigration and border control. He is now an independent border management consultant, Managing Director of Fortinus Global Ltd, and chairperson of the International Border Management and Technologies Association.

Central Bank of Ireland governor Philip Lane believes the UK and the European Union will eventually agree on a withdrawal deal, with a long transition period, avoiding a chaotic crash out of the bloc.

“The incentive for the UK to accept a version of the current deal is very strong,” he told an event in Hong Kong. 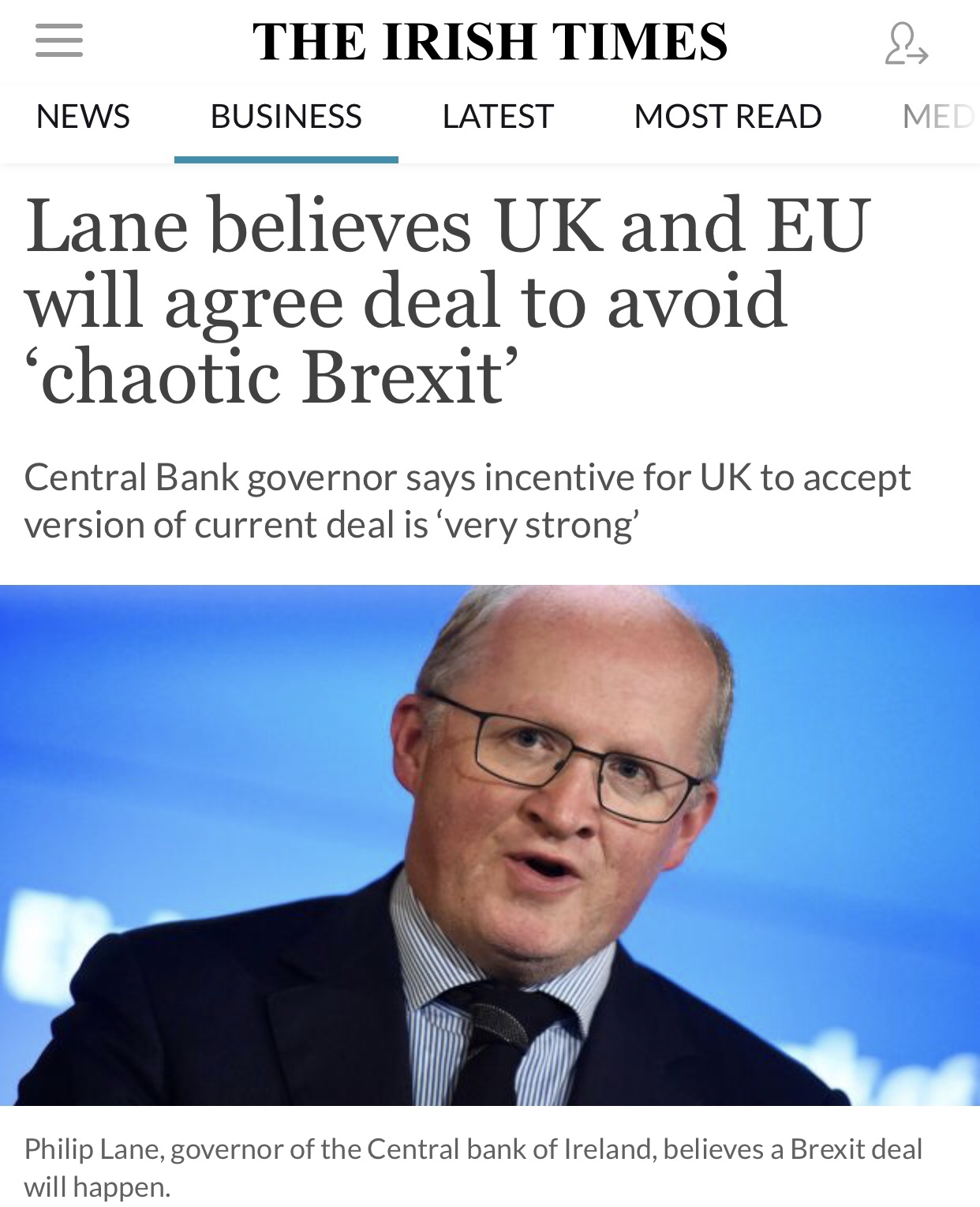 Theresa May can convince the bloc to amend the divorce deal she agreed in November and then convince MPs to support it.

In his speech, Mr Lane cautioned that the European Central Bank (ECB) should not “overreact”to recent economic data signalling a slowdown in activity in Europe.

Mr Lane said while the Frankfurt has acknowledged a shift to the downside in recent weeks, the domestic euro-area economy remains “pretty strong”.

Eurogroup finance ministers on Monday backed Mr Lane’s candidacy to be the next ECB chief economist. He will take over from incumbent Peter Praet in June.

Governments will then make the final appointment when EU leaders gather in Brussels for a summit in March, after consultations with the European Parliament and the Governing Council of the ECB.

“So we will have new comprehensive forecasts in March and at that point I think the ECB can decide where next,” Mr Lane. He later added that remark was “no signal whatsoever about decision making.”

His caution about overreacting to recent data echoes that of ECB vice president Luis de Guindos, who said on Monday that many of the factors signaling a slowdown in the 19-nation currency bloc were temporary in nature. Manufacturing across the region has slumped and business sentiment is subdued, adding to fears that the global economy is slowing sharply in the first few months of 2019.

“It is even more important during these periods to make a close study of the data because what we have is I think different signals,” Mr Lane said. “It is early days in 2019, we have to not over react to any particular announcement or new data release and really take a measured approach to all of the data,” he said. – Bloomberg

Here are the 20 busiest ports on the planet

An estimated 90% of world trade is facilitated by maritime shipping, and as trade volumes continue to increase, the world’s busiest ports continue to grow larger and more efficient to meet demand. 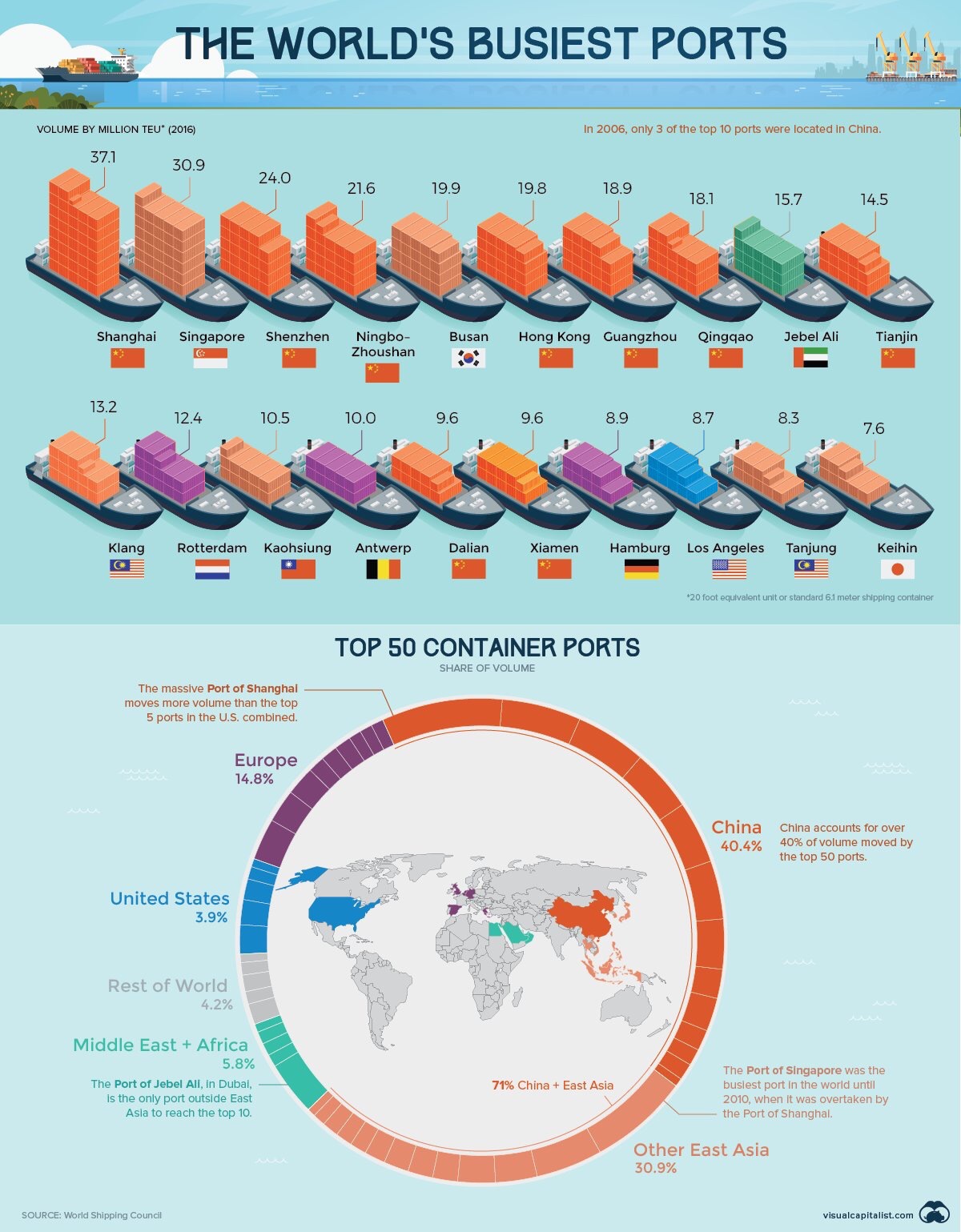 In fact, in just the last four years, the median annual volume of the top 50 ports jumped from 5.49 to 5.86 million twenty-foot equivalent units (TEUs).

Here are the world’s 20 largest ports, using the most recent data from the World Shipping Council: 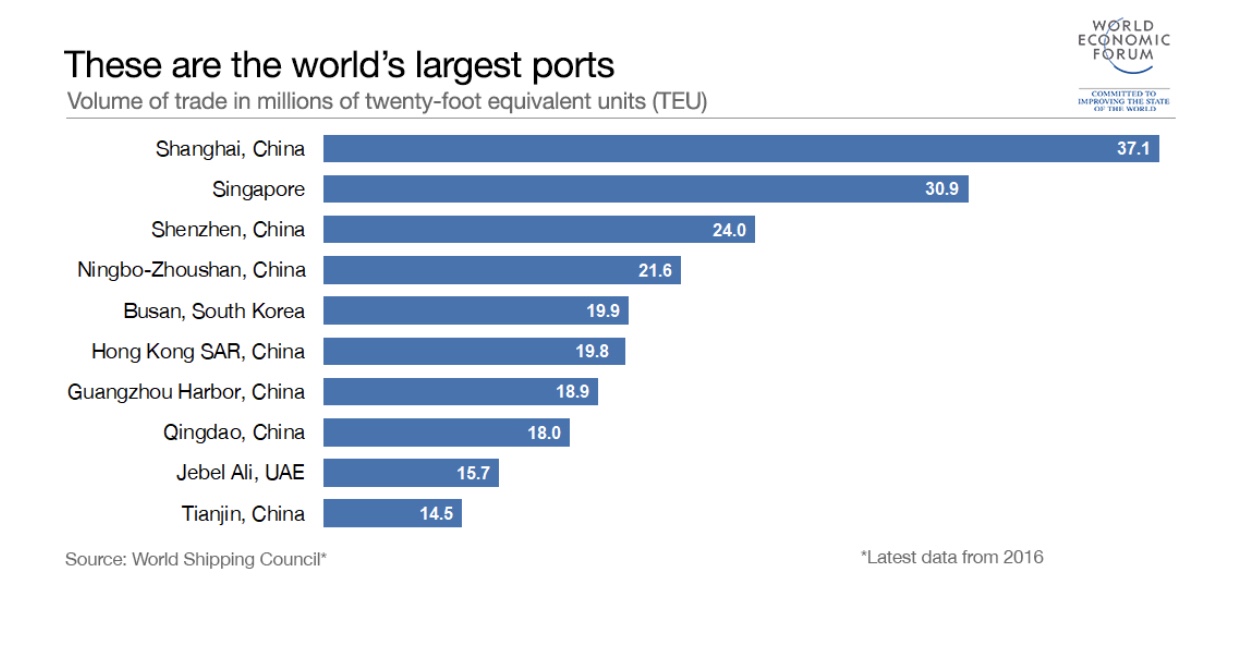 From dollar store knick-knacks to nuclear reactor components, China’s manufacturing output is a critical link in the global supply chain. Getting all those products to consumers and companies around the world is big business, and over the past decade, China has emerged as the heavyweight champion of world shipping.

While shipping volumes on a global basis continue to rise, not all of that growth has been spread around equally. This is particularly true for established titans of the South China Sea.

At the outset of this millennium, Hong Kong and Singapore were home to the busiest ports in the world. Today, both are facing increased competition from neighboring ports, as well as declining volumes:

In contrast, the massive Port of Shanghai saw a 71% increase over the last decade, and many other Chinese ports has seen significant growth in volume in recent years.

If China’s One Belt One Road initiatives and investments in global port facilities are any indication, the country’s domination of maritime shipping will only continue to strengthen in the near term.