PM May plays her Brexit cards

Theresa May has said MPs have “one last chance” to deliver Brexit, urging them to back what she said was a “new deal”.

MPs will get a vote on whether to hold another referendum if they back the EU Withdrawal Agreement Bill, she said.

In a speech in London, the PM implored MPs to come together, saying a negotiated exit from the EU would be “dead in the water” if they rejected the plan.

“I have compromised, now I ask you to compromise too”

“I have compromised, now I ask you to compromise too,” she said, adding that she had even “offered to give up the job I love earlier than I would like”.

Mrs May said the deadlock over Brexit was having a “corrosive” impact on political debate in the country and was stopping progress in other areas. 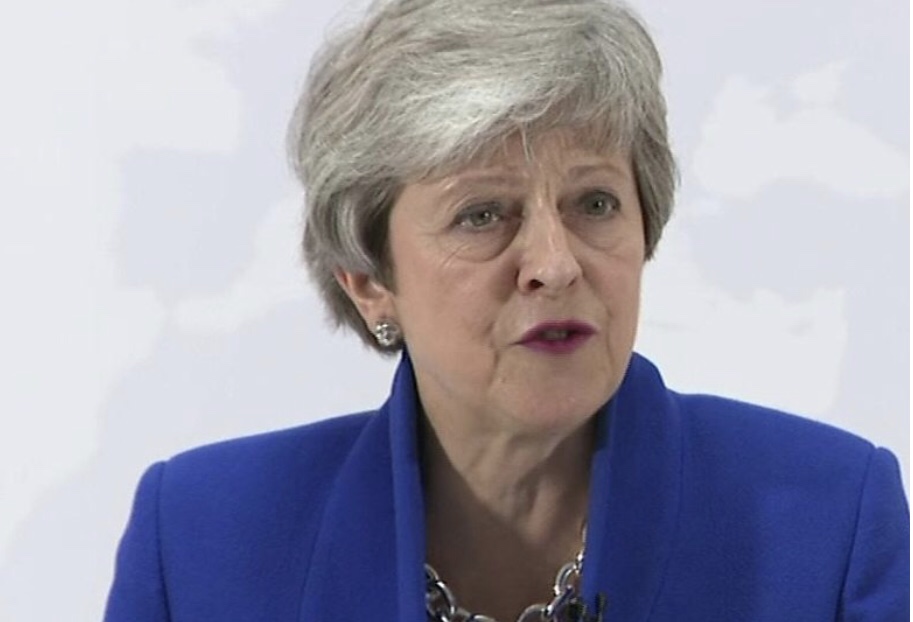 “The majority of MPs say they want to deliver the result of the referendum… and I believe there is now one last chance to do that,” she said.

“We are making a new offer to find common ground in Parliament. That is the only way to deliver Brexit.”

The key points of the PM’s revised plan are:

While she personally opposed another referendum on the terms of Brexit, the PM said she recognised the “genuine and sincere” feelings on the issue in Parliament.

“We are making a new offer to find common ground in Parliament. That is the only way to deliver Brexit.”

She urged MPs to back the Withdrawal Agreement Bill at its first parliamentary hurdle in June and then “make the case” for another public vote when the bill was examined in detail later.

Tánaiste warns of no deal by default

The EU will not renegotiate the Brexit withdrawal deal, regardless of who the UK’s next prime minister is, Simon Coveney told Britain yesterday.

In a scathing assessment of the political situation in the UK, the tánaiste warned that Britain could trigger a no deal “by default” if it failed to “get its act together”. 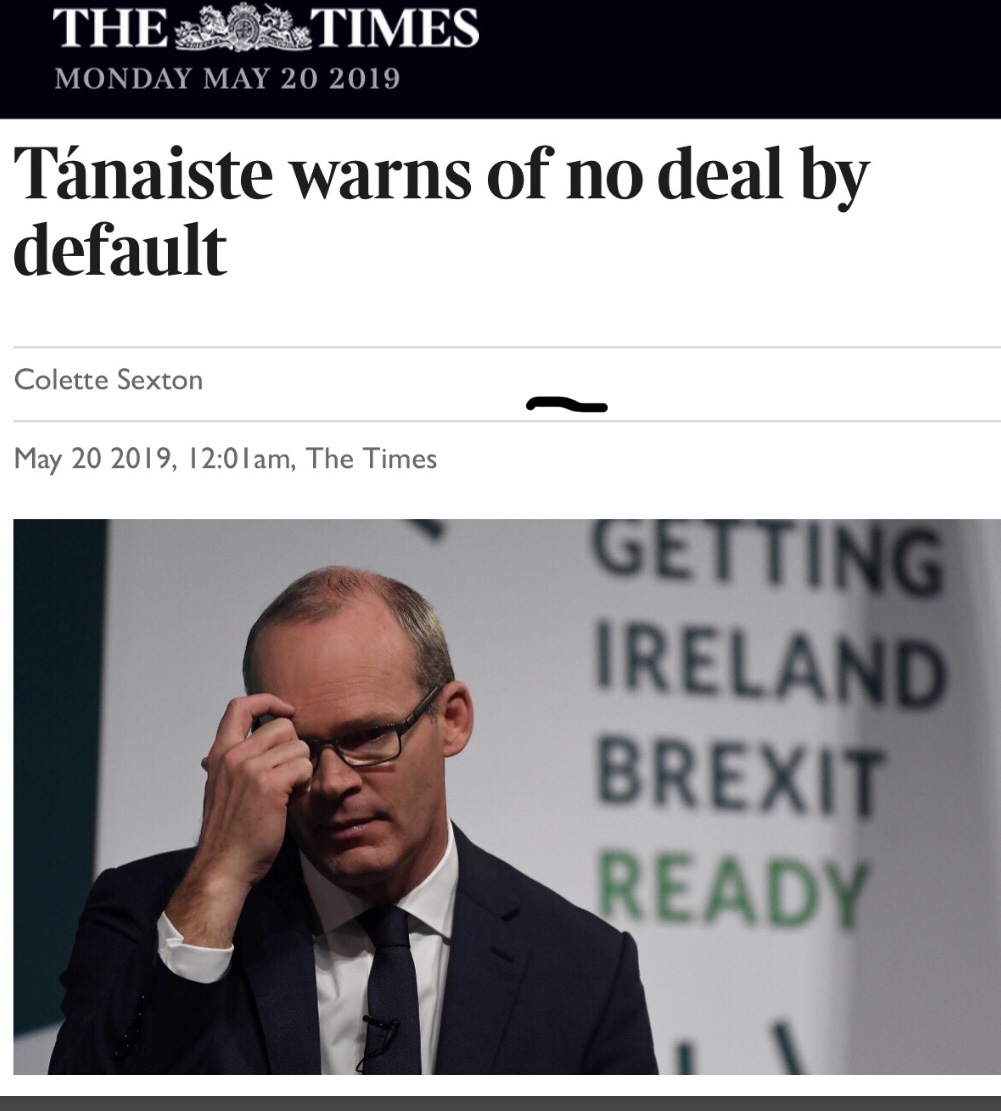 He described political events at Westminster as extraordinary and questioned the logic of politicians who believed that a change of leader would deliver changes to the agreement struck by Theresa May. “The EU has said very clearly the withdrawal agreement has been negotiated over two and a half years, it was agreed with the British government and cabinet and it’s not up for renegotiation, even if there is a new British prime minister,” he said on This Week on RTÉ Radio 1.

He said the UK should not assume that another extension would be granted by the EU if a deal were not agreed by the deadline, October 31. He said the EU was set for big challenges as a result of the European elections and would be likely to devote less focus to Brexit.

Noting the prospect of Mrs May offering pledges on technological solutions for the Irish border in her final attempt to get the withdrawal treaty through Westminster next month, Mr Coveney said he did not have an issue with that as long as it did not undermine the border backstop provisions within the withdrawal agreement.

“Mrs May offering pledges on technological solutions for the Irish border in her final attempt to get the withdrawal treaty through Westminster next month, Mr Coveney said he did not have an issue with that as long as it did not undermine the border backstop provisions within the withdrawal agreement”.

The tánaiste said that UK politicians who thought a new prime minister could strike a new deal did not understand the EU. “For the EU and Ireland this has always been about trying to protect the EU, its integrity, its single market, its customs union, its members and also trying to respect the decision of British people,” he said.

“For Britain in many ways it’s been about party politics and personalities and many people seem to think Britain would have got a much better deal if only they had a tougher prime minister. In my view that is a fundamental misunderstanding of how the European Union operates,” he added.

Mr Coveney was speaking as a British cabinet minister claimed yesterday that the Conservatives and Labour were just “half an inch apart” on the terms of a Brexit deal.

Rory Stewart, the UK international development secretary, said that despite the collapse last week of cross-party talks aimed at finding an agreed way forward, there was little that divided the two sides. He suggested that even if the Labour leadership was not prepared to support Mrs May’s deal when she brings it back to the Commons, other “moderate, sensible” Labour MPs may do so.

Mrs May has said she is preparing to make a “bold offer” to MPs in a final attempt to get her beleaguered deal through parliament and on to the statute book before she leaves office.

British ministers will begin discussions today on a package of measures to be included in the forthcoming Withdrawal Agreement Bill aimed at securing cross-party support. The weekly meeting of the British cabinet tomorrow will then consider plans for a series of “indicative votes” in the Commons to establish which proposals could command a majority in the House.

The bill, which is needed to ratify the deal with Brussels, is expected to include measures on protecting workers’ rights, an issue where agreement with Labour was said to have been close.

Writing in The Sunday Times, Mrs May said: “I still believe there is a majority in parliament to be won for leaving with a deal.

“When the Withdrawal Agreement Bill comes before MPs, it will represent a new, bold offer to MPs, with an improved package of measures that I believe can win new support.”

Mrs May has said she will bring the bill before MPs for its second reading vote in the first week of June after the short Whitsun recess.

PM Theresa May writes today in Sunday Times that she will in June present a new bold version of the Brexit Withdrawal Agreement to the Commons. May says:

When the government puts the Withdrawal Agreement Bill — the law that will take the UK out of the EU, deliver Brexit and allow us to move forward after three years of hard work — before parliament in a couple of weeks, it will truly be decision time for MPs. 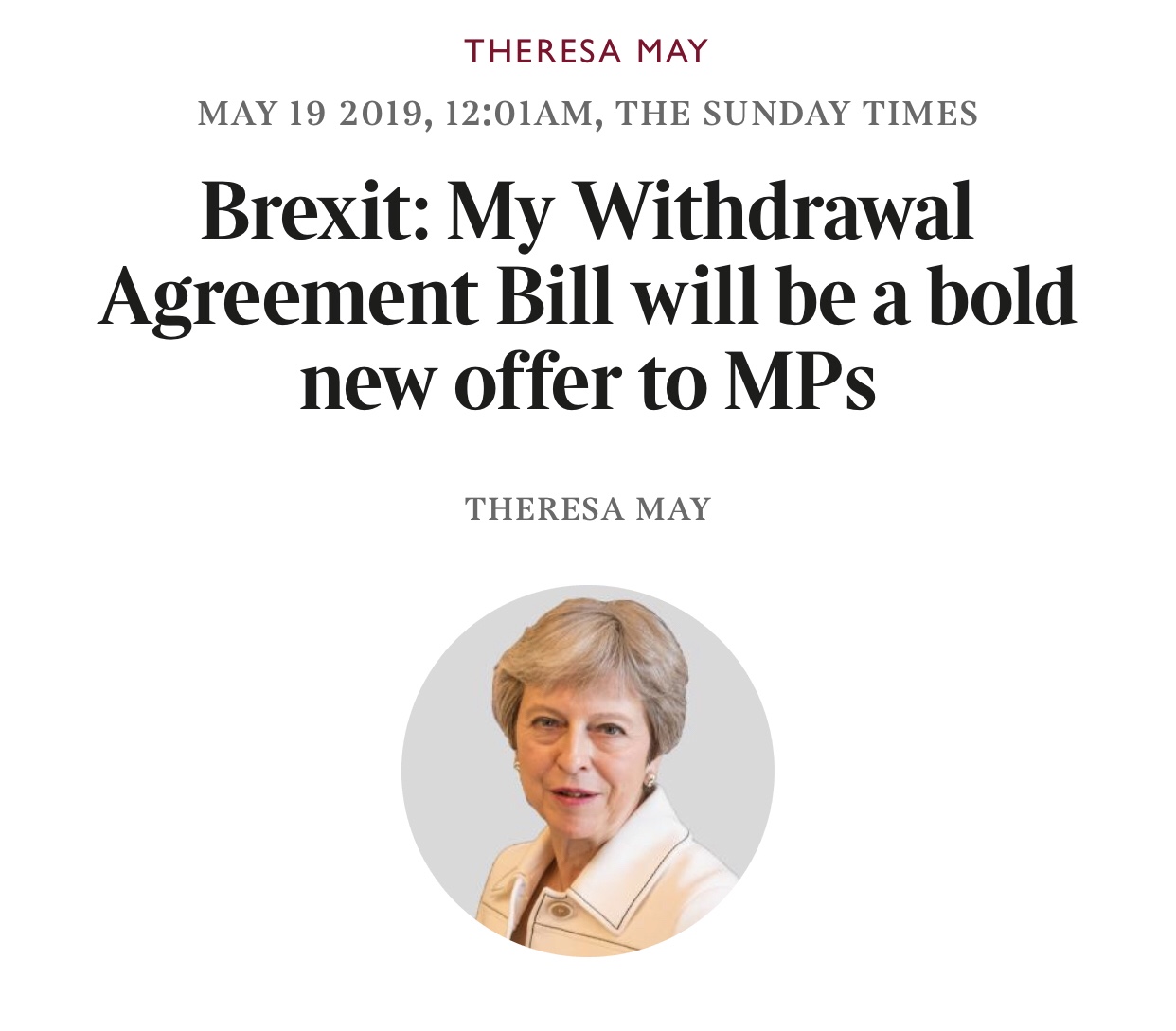 Before that happens, the British people will go to the polls in the European elections on Thursday. I hope that everyone who wants to see Brexit delivered in a responsible way as soon as possible will vote for the only party that can actually deliver that: the Conservative Party. The other parties standing in this election either cannot deliver Brexit or have so far refused to do so. Only the Conservatives can and will.

But whatever the result on Thursday, it will then be for MPs to take a decision.

On three occasions, Labour and the other opposition parties — and some MPs on my own side — have voted against the withdrawal agreement. On each occasion the majority against it has got smaller, with more and more MPs giving it their support, but a sizeable gap remained.

Because passing the withdrawal agreement is an essential requirement of any orderly negotiated Brexit, I did the serious thing and sat down with the opposition in parliament to try to build support for a deal across the House of Commons.

There were those who criticised me for doing so, but holding the talks was the right thing to do.

We have been able to find common ground with Labour on a number of issues, such as on rights and protections for workers and the environment, and on security. I believe there is also now a much deeper understanding among the Labour leadership about the fundamental economic issues that our deal addresses — and which any negotiated Brexit would have to address.

Some other issues have proved to be more difficult, in particular the question of a second referendum. The fact is that while nine out of ten Conservative MPs have backed the Brexit deal, there is a much bigger split on the Labour benches on a so-called “people’s vote”.

While many Labour MPs genuinely do want to deliver Brexit, a large number of others are wedded to holding a second referendum with the aim of reversing the decision of the first. That is not a course I have ever supported. We had a people’s vote in 2016 — and the people are still waiting for their decision to be implemented.

Doing so remains my focus. I still believe there is a majority in parliament to be won for leaving with a deal. As a result of the talks with Labour, and following our ongoing discussions with MPs from right across the House of Commons, the government now has a much clearer understanding of what it will take to get a deal over the line.

When the Withdrawal Agreement Bill comes before MPs, it will represent a new, bold offer to MPs across the House of Commons, with an improved package of measures that I believe can win new support. It will deliver a Brexit that honours the decision the British people took in the referendum with a Brexit that is good for jobs, good for our security, and which sets the whole UK on course for a bright future outside the EU.

The cabinet will consider the details of those changes next week. It will also consider whether holding votes in parliament to test support for possible solutions would be a useful prelude to MPs considering the legislation.

But whatever the outcome of any votes, I will not be simply asking MPs to think again. Instead I will ask them to look at a new and improved deal with fresh pairs of eyes — and to give it their support.

While the deal MPs are to vote on will be different, the dynamics of their decision will remain the same. A majority of MPs are against leaving without a deal; whatever you think of that as an outcome, parliament will do all it can to block it. The British people want Brexit resolved, so our country can move forward and address the many other issues that they care about. They will be looking to parliament to break the impasse. Backing the withdrawal bill is the way to do that. It is now high time we delivered.