How far away are UK and EU from reaching a Brexit deal?

The Guardian is today specualting about the chances for a Brexit deal between United Kingdom and the European Union. 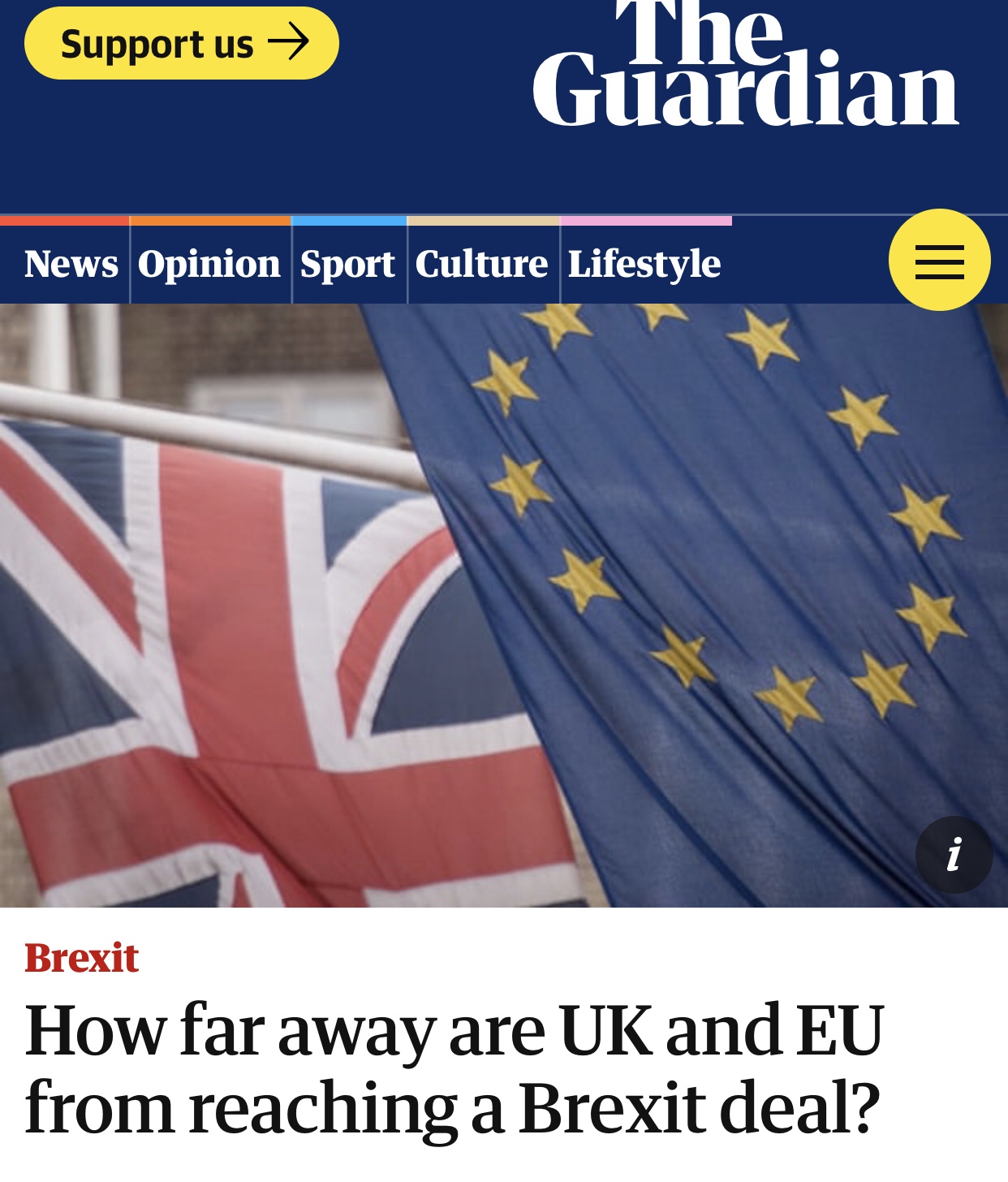 Are we finally going to learn this week whether there will be a Brexit deal?

Perhaps. The EU summit starting on 17 October has long been seen as a hard deadline, but EU leaders will not negotiate legal text in the middle of the night and, realistically, for a deal to happen most of the components would have to be in place by next weekend. Emmanuel Macron has floated this Friday as a deadline, although No 10 thinks 14 October will in practice be the last possible moment for a deal.

What are the main issues dividing the two sides?

There are two, both relating to Northern Ireland. To avoid a hard border after Brexit, a longstanding goal for both sides, Boris Johnson has produced a plan for a new version of the backstop that would keep Northern Ireland in the single market for goods while also keeping it in UK customs territory. This means there would have to be some sort of checks on goods crossing the north/south border.

The UK has produced a minimalist blueprint for how these might operate. But the EU is not convinced the plan would work, thinks it would require new infrastructure that would become a terrorist target, and is alarmed that even the UK is admitting the full details would have to be worked out over the next year.

The UK plan also involves effectively giving the Democratic Unionist party a veto before these arrangements are introduced, and then every four years when they are renewed. This is unacceptable to the other parties in Northern Ireland and, from the EU’s point of view, means a system designed to protect the integrity of the single market is entirely dependent on the goodwill of Arlene Foster.

Will there be a deal?

Who knows, but it is not looking likely.

On the plus side, Johnson has got the DUP and most of the die-hard Tory Brexiters from the European Research Group to support his plan, which means he is close to having a Commons majority for it. It is also undoubtedly true that a no-deal Brexit would be damaging to both sides, which implies that a compromise should theoretically be possible.

But at stake are fundamental issues (essentially, whether it is possible to leave the EU customs union and still have most of the frictionless border advantages of being in), not minor customs technicalities, as Johnson claimed in his party conference speech. And if the UK were to compromise further, as the EU is demanding, the fragile Tory/DUP coalition that Johnson has assembled behind his plan would start to crumble.

Both sides intend to keep talking this week, but that does not necessarily mean they are convinced they can get a deal. The EU does not want to be seen to be pushing a member out (its harsh treatment of Greece during the eurozone crisis was a propaganda bonanza for anti-Europeans). And Johnson wants to be seen to be doing all he can to secure an agreement, to give credibility to claims (already being rehearsed by the Tories) that the EU would be to blame for no deal.

If there is no deal, will the UK leave anyway on 31 October, as Johnson claims, or will the Benn act ensure an extension?

No one knows for sure, although supporters of the act, which will require the PM to “seek to obtain” a three-month Brexit extension under article 50 by 19 October if the government has not passed a deal, believe the legislation is robust.

No 10 says Johnson will obey the law. But he has also said he will not resign and would rather be “dead in a ditch” than extend Brexit, and his aides have claimed they are considering various unspecified schemes to subvert the act, which cannot guarantee an extension anyway because the EU could always say no (although that is thought unlikely).

In practice, this is another matter that could get settled in the supreme court. But it may be significant that in private the PM’s team is now more willing than it was to accept an extension might have to happen. They used to think it would be electoral suicide for the Tories, but now they believe Johnson could win anyway, provided he was seen to have tried to deliver Brexit by the end of October.

← Reading is learning, learning is life
Malmö FF is back at the top →